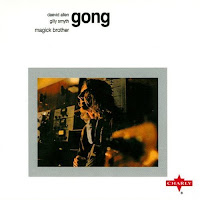 After Daevid Allen left the Soft Machine in 1967 because of a Visa expiration in Paris, France, he decided to form one of the strangest bands with Female whisper vocalist Gilli Smyth to release their debut in album in 1969, Magick Brother. This is almost a perfect example of the canterbury progressive rock scene mixed with experimentation and the sounds of an altercation of Syd Barrett's twin brother of 'The Madcap Laughs'. Magick is a magnificent Space Canterbury Prog Rock album that would have the stoners and hippies would absolutely get high into.
Tracks like the space-punk three chord humor of 'Rational Anthem' is almost a political statement about the revolution of the world and the changing that's about to become as, including the lyric 'Yes We Are, We're going to change the world!' not bad for a band that could bring the politics to a new level of global warming parody, Daevid also takes a sinister and eerie sound on the guitar and take a darker vocals inside the TV of the Outer Limits with 'Glad to Sad to Say', They would also use a sense of humor of school-life and grocery sexy stores with 'Chainstore Chant Pretty Miss Titty' and 'Five and Twenty Schoolgirls'. They would also use their sense of humor of a crossover of Monty Python meets Pink Floyd of ambient music with 'Fable of a Fredfish and Hope you feel Ok', is a real kicker for Gong nuts. Gong were just getting started back in 1969 and almost getting ready to get on the space shuttle to go to the planet Gong. It wasn't until they released the Radio Gnome Invisible concepts that would have Teapots and biscuits into a psychedelic taste of LSD and british insane music!
Posted by znathanson at 10:10 AM