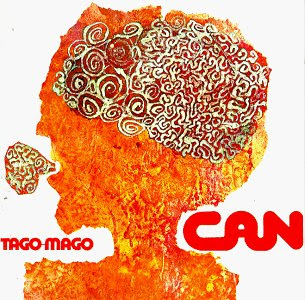 I first became aware of Can's music back in 2005 when I discovered a track on the OOP (Out of Print) Rhino 5-CD box set called 'Supernatural Fairy Tales: The Progressive Rock era'. The track on the 2nd disc was a track called 'Oh Yeah' and I remember hearing that track with a sound that had a nuclear radioactive explosion. It was absolutely brilliant and hearing the composition for about maybe seven minutes and thinking to myself 'This is a band I heavy needed to get into.' And believe me, I did. It was filled with a New Wave and Punk edge to it. That track and Can's 'Tago Mago' is a perfect combination of the Krautrock genre of the early 1970's.
This album almost broke the door down for a lot of the Krautrock scene with bands such as Amon Duul II, Faust, NEU!, Cluster, and Ash Ra Tempel to name a few, but Can were one of the best bands that ever come out so damn good with their third album. It had a cross-over genre with the Rap scene, 70's Funk, Ambient music, and of course the dreaded '80s genre of the New Wave scene. For example, the 18-minute improvisation track 'Halleluwah', which is a mixture and crosses between Parliament Funkadelic, Berlin trilogy of Bowie's Low, and the proto-punk sounds of Lou Reed and the Velvet Underground. The soundscaping sounds on the introduction track of 'Paperhouse' is absolutely brilliantly and excellently well done. The late Michael Karoli's guitar track just sends you through the back door in a psychedelic mad house of insane lunatics while Damo Suzuki and Holger Czukay just bring the doors down with Damo's vocals and dance plus Holger's funky bass solo and Suzuki screaming like a madman.
One of the weirdest track on this album is another 18-minute track 'Aumgn', is a mixture of Frank Zappa and the Mothers of Invention meets Avant-Garde insanits of the soundcaping sounds of early albums of Tangerine Dream meets Pink Floyd's live version of 'A Saucerful of Secrets'. This has Can going nutty and crazy on this track with vocal chants, fast drum tempo patterns, and loud depaturing sounds of the keyboards of Irmin Schmidt. Can were one of those strange and odd bands that you really need to get into. They were more technique, more avant-punk-garde sounds and do more of a jam sessions that would last forever.
In my opinion, the punks in the late '70s loved what the Kraut Rock scene was doing because it was more different, not doing anything bombastic than what Yes and ELP were doing, sonic punks they were and Can kick some ass! The influence of Can's music is still in there with The Sex Pistols, Buzzcocks, PiL, Blur, Sonic Youth, Porcupine Tree, and the texas progsters The Mars Volta. Luckily, Omar Rodriguez-Lopez worked with Damo Suzuki on Omar's quintet album Please Heat this Eventually!
Posted by znathanson at 7:57 PM