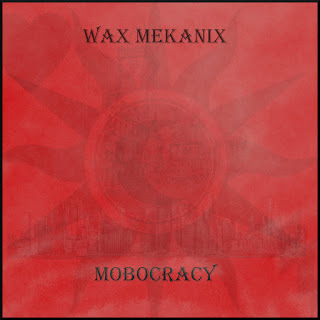 Wax Mekanix is a name you probably may or may not recognize. One of the founding members of cult rockers Nitro, Mekanix has been writing and recording music for forty years, his music can be both raw and bold. And his latest release on the Electric Talon label entitled Mobocracy, is a pure brutal machine gun metallic release last year.

From the opening track of Blood In Your Eyes, there are some fanfare midsections with blistering guitars and drums that take us into some spacey outer limit reverb effects, followed by rising sequences to raise a lot of hell. Victorious has a dooming post-apocalyptic vibe tackling the theme for survival of the fittest.

Part Budgie and part Dee Snider, it is an epic battle with a metal operatic roar to be a part of a fight club with knocked down brawl with some heavier solo sections while All Freaks has a ‘70s rising Glam Rock stomper. The introduction has this Hendrix-sque intro as Wax channels a sing-along type style of Budgie’s Homicidal Suicidal at times.

With the ignition for lift-off, Mad World has this nod to Peter Hammill’s lyrical textures as if he’s channeling Van der Graaf Generator’s Killer with a booming fast-sped action sequence of thrashing guitars that becomes a climatic duel between good and evil. Ghostland tackles the subject by facing your own demons. Tidal drumming that makes you go surfing at the right momentum, it’s a neo-psychedelia atmosphere as it goes into a deep, dark area as the victims confront the abusers and knowing that there’s no turning back now.

Closer, Black sees Wax honoring the late great Ennio Morricone on The Good, The Bad, and the Ugly. With a dark spaghetti western theme and flamenco vibes of Ottmar Liebert with some hand-clapping rhythm section, it becomes an intense tango with some difficult sceneries that can keep you guessing until the end.

Mobocracy will take some time to get into. But for Wax, he got me intrigued to see what he cooked inside the kitchen. And it is a combination between Doom, Power, Thrash, and Avant-Metal. It is all here!

Posted by znathanson at 3:30 PM