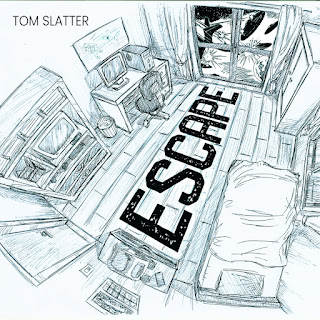 It’s been a long time since I reviewed something out of the label, Bad Elephant Music. Back in 2013, I listened to one of the most mind-blowing artists to come out of the label named Tom Slatter. His third studio album, Three Rows of Teeth, was a combination between early Genesis, Caravan, and William D. Drake. And I gave it a glowing review along with his other two; Through These Veins and Black Water. And then I had completely forgotten about him. Until now.

His latest release this year Escape, deals with escapism. Slatter took inspirations from comic books, sci-fi novels, computer games, and being an indoor kid. Slatter is bringing more stories to life again as an imaginative movie brought to life. So has it been a while? Oh yes. So let’s get straight to his new album.

From the moment Time Stands Still opens the album off, you hear these static sounds coming from the TV while blistering guitar riffs channels a thrashing attack in mid-tempo arrangement. It channels Diagonal’s sole self-titled debut album that Tom had picked up for inspiration as his eerie stories structure in more Mellotron’s to float in at the right moment.

It goes through this Ayn Rand-sque waltz channeling both The Fountainhead and Atlas Shrugged with a folk-dystopian midsection as the machines take over the entire planet. And then it back to the metallic forefront with an orchestral vibe as Tom tips his mad hattering hat to early Black Sabbath and the first two Iron Maiden albums with arpeggiated textures brought to life.

Too Many Secrets has these electronic hay-wiring effects going chaotic as it tells the story of a group of soldiers who are in a rocket ship flying to another planet, fighting one of the bloodiest wars that’s going on. And the question that remains, is it worth fighting this stupid war that’s happening? Not to mention the dooming and sludging atmospheres that he brings to the kitchen table.

Let’s All Pretend reminisces between William D. Drake, Present, and Osanna’s Palepoli thrown into the blender. It’s Rock Progressivo Italiano meets the Rock In Opposition movement with a nod to the late, great Roger Trigaux’s guitar section while Rats becomes a Punk-Folk attitude.

Fast-sped drums followed by guitar melody, the unexpected time changes go from one corner of the living room to another. You can hear Tom channeling Bowie’s Outside-era as he picks up the pieces where Detective Nathan Adler had left off. Collateral is a psychedelic swinging garage rock dance. It becomes a dance to the death between Be-Bop Deluxe’s Futurama sessions as it climbs aboard Gentle Giant’s train chugging 500 miles per hour.

Going Nowhere is a 19-minute sci-fi opera brought to life. You can hear a Beefheart-sque introduction that makes Tom’s train turn into a fast-speeding overture. There is some Edgar Allen Poe structures for the main character’s death to happen with these guitar-organ sound that is completely unexpected, but works very well.

Not only there’s a ‘60s guitar on a tightrope, but he’s continuing where Rush had left off during an extension of Cygnus X-1 Book One: The Voyage. And then, he makes it a joyful walk before it gets even heavier as Tom fires more missiles by raising more hell than ever before.

Tom then also returns back for another Italian Prog dinner from Banco del Mutuo Soccorso’s Darwin period to I Giganti’s Terra in Bocca. You can the sound of a carousel organ come to life as Tom brings the steampunk audiences to a standstill as the story gets even more dangerous.

Escape is Tom Slatter’s nightmare brought to life. He is still our storyteller brought to life again, following in the footsteps of Alan Moore, Neil Gaiman, Rod Serling, and Vincent Price. And I hope that I will hear more from him in the years to come during these tricky times we’re living in.

Posted by znathanson at 5:38 PM No comments: