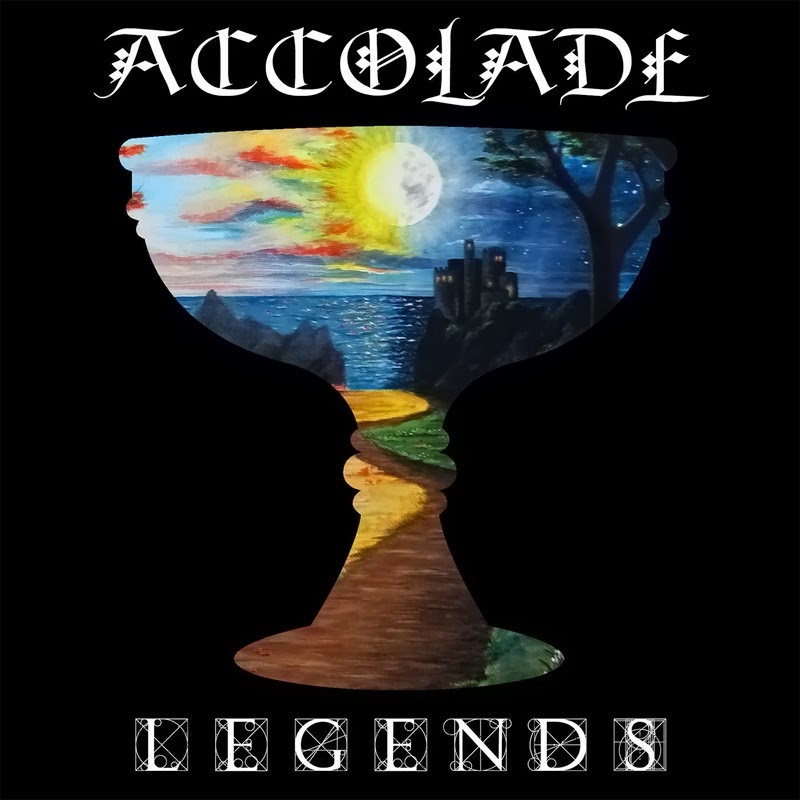 Combining the genres of; Gothic, Medieval and Progressive music, it is really a wonderful mixture of the three combined into one from an upcoming band from San Francisco that just completely took me by surprise. Accolade is a trio that launched seven years ago and their music is mysterious, haunting, and hypnotic. Their new album, Legends, released last year, was inspired by their visit to the Chalice Well, also known as Avalon, which is at the foot of the Glastonbury Tor in the countryside of Somerset, England.

And this album is a dedication to the legends of not just King Arthur, but dedicated to the painting of the Lady of Shallot and the poetry by Alfred Lord Tennyson. The history of the place in which they have gathered for tourists to find peace, healing, and inspiration in which the album has a lot of the storytelling in their music based on the medieval tales that is straight out of the 12th century as they go back in time to tell it as short stories that two of the tracks clock in at 11 and 20-minutes almost as if it’s a medieval prog-folk opera that is well structured.

And from start to finish, it’s a gentle and spiritual journey that is a warm touch to the Acid Folk/Progressive Rock sound of the 1970s and the future that is captured through the essence of; Trees, Comus, Renaissance, and White Willow. The trio considers; Stefanie Renee on Lead Vocals, Tambourine, Recorder, Zills, Aaron Goldstein on Guitar, Mandolin, and Keyboards, and Cade Burkhammer on Drums and Percussion.

Opener, Gelfing Song, starts off with dripping water, Stefanie’s vocalization in the mind of Annie Haslam, the Rain stick, and the thumping percussion along with the instruments setting the tone of what’s about to come.  Then Stefanie’s operatic vocals come along with Goldstein’s arrangement come in on Elf King, has some beautiful church organ-like sound, acoustic guitar lukewarm crisp, fanfare horns and a touch of the Celtic beauty as well that is almost straight out of the sessions of Ignis Fatuus.

Hymn to the Moon Goddess, in which it was written in the ancient Hurrian language around 1400 B.C., has this darker and atmospheric beauty as Renee sings the language as Goldstein and of course Burkhammer’s percussion in which it has a raga-rock surrounding, the two of them creates some mystic magic on their instruments that has a moody and cavernous surroundings before ending on a deafening boom. It’s really surreal and stunning. Then, we come to the two epics to close off the album.

The Journey, is an 11-minute epic that goes through variations. From the gentle classical guitars with a folky feel for the first few minutes into a heavy hard rocking adventure with some powerful riffs and chords, to set the fast-driven tempo including some incredible background vocals done by Nathan Wetter to help the band out as Stefanie Renee sings her heart out before going back into the folky landscape as Goldstein goes to the organ to give it a relaxation. And then it’s back into the heavy rock touches to close the piece off including a thunderous percussion and drum solo for a couple of seconds done by Burkhammer, is a fitting finale.

The closer, the 20-minute epic, The Lady of Shallott, again in which it was inspired by both the painting and Tennyson’s poetry, is a tribute and homage to Renaissance. There are elements of Prologue and Scheherzade flown in there and at times it’s as I’ve mentioned in the introduction; Gothic and Medieval, and throw in some of the Symphonic Rock and marching fanfares with the militant structures in there, it is really an experience of a tribute to that time period. The band also funded the project to raise enough money on Kickstarter back in 2012 so that they can record the album and complete it. And it was successfully funded last year on January 17th.

I have listened to Legends about three times already and it is a wonderful and beautiful experience that Accolade has done an excellent job of capturing the genres and staying true to its roots and it makes you wonder what kind of tricks they will have up their sleeves in the near future. Their second album is a stirring yet evocative album from beginning, middle and end.
Posted by znathanson at 8:12 PM No comments:

Since I've done the Top 30 Albums of 2013, I've decided to name the top 10 Reissues of 2013 on what were some of the best for me that came out of the Reissues last year and here it is (And criticism is welcome):