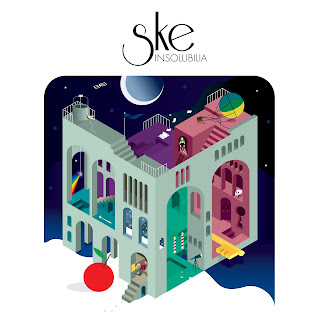 It’s been ten years since Paolo “SKE” Botta, best known for his partnership between Yugen and Not a Good Sign has released a follow-up to his 2011 debut 1000 Autunni released on the AltrOck/Fading Records label. It received critical acclaim and then went out-of-print until 2018 when it was reprinted as 1001 Autunni as a double CD set featuring an additional live recording.

Now in 2021, SKE has released a follow-up entitled Insolubilia. Produced by Marcello Marinone, the second album is a return to the melodic waters once more by following in the footsteps of Gryphon, Latte E Miele, Gentle Giant, Present, Wojciech Kilar, Univers Zero, and Le Orme’s Felona E Sorona, Paolo’s follow-up is like a flaming fire that simply won’t burn out.

And to be allowed to have 25 musicians from Stormy Six, Wobbler, Ciccada, Isildurs Bane, Loomings, and Shamblemaths to name a few, they aren’t just band members lending Paolo a helping hand, but a band of brothers working together both as a team, and as a family. Not only have we had the five-part opus of the title-track, but some of the most incredible highlights that SKE has taken their listeners close to the edge.

Opening track Sudo features an intensive organ and synth exercise with melodic horn arrangements. Martino Malacrida’s climatic drum patterns takes us into a tidal-waving climax featuring a spine-tingling folk background done by Tommaso’s mandolin. Insolubilia II has Evangelia Kozoni’s angelic voice soars through the skies as we hear Airport announcements throughout the building ready for another plane flying to another city.

Jacopo’s mallet percussions has some complex time changes while Francesco’s heavy guitar lines go through a RPI (Rock Progressivo Italiano) momentum with an arrangement done in the styles of Van der Graaf Generator. Lo Stagno del Proverbio takes place in the aftermath of a mob riot gone horribly wrong. Luca’s trumpet takes us into the bloody streets by crying out to the gods above the heavenly skies with some fanfare arrangements.

La Nona Onda is a heavy, nightmarish, and brutal composition. Paolo channels the Pawn Hearts period by continuing where A Plague of Lighthouse Keepers had left off. As the snarling textures of the guitar and mellotron lifts-off into outer space, it continues of the reprise for the final battle on Sudo.

Insolubilia IV at first begins with some 8-bit video game synthesizers, but goes in depth of the RIO movement. Camembert’s Melanie Gerber is giving the sermon inside a gothic cathedral as she channels the vocal styles of North Sea Radio Orchestra’s Sharron Fortnam with some Wyatt-sque vibes as a mournful arrangement.

Scogli 4 feels at times like a Univers Zero composition. Honoring the late great Roger Trigaux with some late ‘60s Giallo themes from Mario Bava’s Blood & Black Lace, the dooming harpsichord, clarinet, and rain pouring effects leaves us on a cliffhanger not knowing when the killer will strike again.

The operatic choirs and horror themes on Insolubilia V comes at you with an eruptive explosion for the shocking finale. Almost making an alternate score to the 1975 unsung gem of Day of the Locust, the bell tolls with some ghostly synths before Fabio’s bass brings the fuse to explode at any second by going into a crossover between the first two albums of Banco del Mutuo Soccorso and Black Sabbath’s Sabbath Bloody Sabbath rolled into one.

Insolubilia is quite an adventure from the complexing stories by Paolo “SKE” Botta. He has a headstrong view on where he wants to take the next logical step by following into a dangerous tightrope. But for Paolo, he’s brought a lot of ammunition and brutal textures to life on his second release during the pandemic.