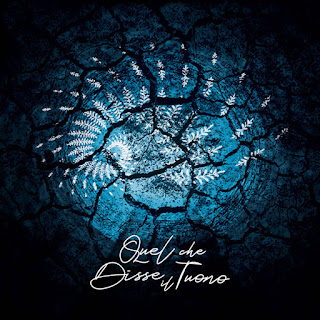 Quel Che Disse il Tuono are an Italian progressive rock quartet that considers members of Unreal City and Cellar Noise. Last year, they released their debut album on the AMS label entitled, il Velo Dei Riflessi. Inspired by T.S. Eliot’s poetry The Wasteland which was originally published in 1922, the poem tackles themes on religion. Not only that, but how the modern world itself is not impacted from the landscape as it was before.

The opening track il Paradigma Dello Specchio, fires up their engines with mellotron, guitar, and flute. By the moments the clouds are parting, we are driving in a deserted highway with the four members channeling the Mirage-era from Camel with its organ fanfare by travelling into the unknown as Zanetta channels the Marquee Moon-sque vibes from Television’s Richard Lloyd and Tom Verlaine.

As the call-and-response comes crawling out the soil, Figlio Dell‘Uomo is a terrifying nightmare for Zanetta and Gallani adding more fuel to the fire. Featuring some lyrical textures of Jacques Brel’s Port of Amsterdam and My Death, it has some Murple-sque textures for Quel to rescue the penguin to being free from being a sideshow performer and going back to his home land in the North Pole.

Moog snarling monsters coming in to terrorize the city, we are in the battlefields to go into aspects between Van der Graaf Generator and Le Orme as it segues into this post-apocalyptic Twilight Zone atmosphere that Rod Serling had envisioned right before our very eyes.

Il Bastone e il Serpente goes into The Mars Volta’s territory while Francesca channels her vision of Omar Rodriguez-Lopez. Bernasconi slaps some funky bass introduction to honor Bootsy Collins as we head into the city with no chance of escaping with some swirling synths and car revving percussion works by Alessio Del Ben.

Zennetta hammers those frets down with unexpected changes before travelling into space and time of Phideaux’s Snowtorch-era while the final duel between good and evil on Loro Sono Me has some of the most intensive battle sequences for the quartet to head out into the battlefield for honor and bravery.

Il Velo Dei Riflessi may not be everyone’s cup of coffee per se, but while this Quel Che Disse il Tuono’s debut, they really done their homework very well during the pandemic while everything came to a screeching halt last year. So I will be on the look-out for this incredible band to see what they will come up with next.