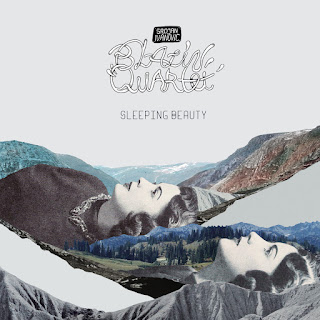 Led by Bosnian born and French based drummer, composer, educator, and arranger Srdjan Ivanovic and his Blazin’ Quartet, they have taken my ears to a whole new level of respect on how much the sounds of beauty, romantic, and poetic sights that is on the band’s fourth studio album from the MoonJune label, Sleeping Beauty. Recorded nearly two years ago for two days in November at Studio Aeronef in Paris, Sleeping Beauty is Ivanovic’s story brought to life.

Alongside Srdjvan’s drumming and piano work, the band considers; Andreas Polyzogopoulos on Trumpet, Federico Casagrande on Guitar, Mihail Ivanov on Upright Bass, and special guest flautist Magic Malik. Listening to this album, is like looking through your old scrapbook and remembering the good and rough times that your families from the past and present had to struggle to make it to survive and not giving up.

And the five centerpieces on here, gives you some insight on how damn good they really are. The tribute to the late great film composer Ennio Morricone fills the spaces between honor and legacy. Listening to The Man with the Harmonica which is something straight out the Italian Spaghetti Western 1968 classic, Once Upon a Time in the West, it's transformed into a dooming finale.

You hear Federico channeling these Tony Iommi-sque guitar structures that he had done on Black Sabbath’s Planet Caravan at the end by capturing some of those blistering hot moments for the final showdown on who is going to be the last man standing with some mariachi fanfare trumpets done by Andreas himself.

From the 1970 movie by filmmaker Giluliano Montaldo starring Richard Johnson and Franco Nero which deals a German deserter execution in a Canadian-run P.O.W. camp in Amsterdam on May 13th, 1945, A L’aube du Cinquieme Jour (Gott Mit Uns) is a mournful composition for both Federico and Andreas setting the sun-rising sequence over the horizon as Casagrande makes his guitar sound like the string section while Mihail and Sedjan follow his passageways to bring some sort of peace with these Wes Montgomery textures.

The title-track and its solo guitar features the quartet going into these dark alleyways between the heart of Italy and Paris. With a romantic dance thrown in, Andreas’ trumpet cries out into the nightly sky as Srd’s drumming goes into this chaotic mode as he gives Federico and Andreas into the reverbing crescendo.

But then Federico comes back for the reprising guitar solo and waking the princess up from a deep, deep sleep. As you can imagine she had slept for a long time for nearly 200 years, you can imagine some of those jazz chord improvisations that he throws in, hopefully to have new up-and-coming students trying to tackle one of his compositions in the near future.

Rue Des Balkans is their nod to Watermelon Man from Herbie Hancock’s Headhunters. Continuing where he left off with Malik’s flute taking the high ground, Srdjan gives him a whole amount of ammunition to give the quartet an insane tango-like finale to knock the doors down with a giant battering ram. But it’s Andreas which takes Srdjan moving from the drums to the piano as he plays some of those minor chord that I can believe they are both polyphonic and diminished sequences to give Andreas a chance to be free once again with a lukewarm smoky atmosphere.

Sleeping Beauty is the blooming flower that is ready to burst open. And from the moment you put this album on, it is something deliciously good that the Srdjan Ivanovic Blazin’ Quartet have unleashed out of MoonJune’s kitchen with a delicious Roma!

Posted by znathanson at 2:31 PM