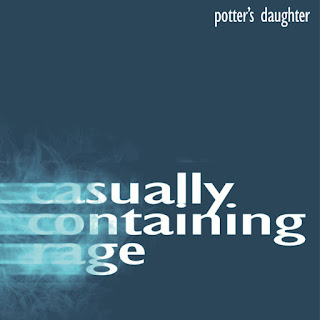 Formed in New York City as Dyanne Potter Voegtlin was a student at the Manhattan School of Music studying classical piano performance, Potter’s Daughter not only do performances in the Big Apple but in the northeastern side of Pennsylvania. They have released their 2018 studio debut on the Melodic Revolution label entitled, The Blind Side. And now they have a new album in the works coming out this fall called, Close to Nearby with guest drummer, Simon Philips.

Last year during the pandemic, they released an EP called, Casually Containing Rage. Three songs that includes a Warren Zevon cover, this was my introduction to the music of Dyanne and Jan-Christian’s music. For me, it was quite an experience since it’s been many years I listened to something from Nick Katona’s label. For me, to open the door to the Melodic label once more, it’s putting one foot into another.

The opening track of To My Love which is a re-arrangement of the sixth track from The Blind Side, it starts off with a middle-eastern mellowing take from The Savage Rose’s two studio albums between the sole self-titled debut and In The Plain in the late ‘60s, Dyanne pours her heart and soul singing to the gods once more.

And all of a sudden, it transforms into a laid-back groove with Patrick’s drum work and Jan’s calming Bass lines while Dyanne tips her hat to the late great Freddie Mercury by channeling the reverbing vocal works on Queen’s The Prophet’s Song from A Night at the Opera. Once Amit’s oceanic guitars fill the salty waters, it cuts to an abandoned area of an art deco movie theater that has now becomes a ghost town.

The cover of Warren Zevon’s Accidentally Like a Martyr from his third 1978 studio album, Excitable Boy, is a heartfelt tribute to the singer-songwriter. While I’m not the biggest fan of Warren’s music, it fits well with Dyanne’s vocals as she looks up to the angelic skies knowing that Warren is watching her, carrying that beautiful arrangement of the song throughout the EP thanks to Jan’s bluesy textures.

The closing track might be one of Potter’s Daughter’s controversial piece called, We Could Be. It tackles the news reports from NPR’s David Greene on the death of George Floyd who was murdered by Police Officer Derek Chauvin on May 25, 2020, is a haunting composition. Whether you agree with this piece or not, you have to give Dyanne a huge amount of credit for tackling this subject.

With its electro-jazz arrangement, the struggle to bringing peace and understanding without violence, is a big, big challenge as Jan has a little split second on the Guitar Synthesizers honoring the late great Allan Holdsworth. Casually Containing Rage is sort of the peak on what is to come for Potter’s Daughter’s next studio album this coming fall.

It will be quite a revelation to see and understand Dyanne’s wings have finally spread by flying over the clouds and seeing the good and bad situations from the outside world on Earth. She might one day bring peace and happiness to our home planet. And with their EP released last year, it will get you going to see what Potter's Daughter will have in store for us on Close to Nearby.

Posted by znathanson at 9:45 PM