Xavi Reija - The Sound of the Earth 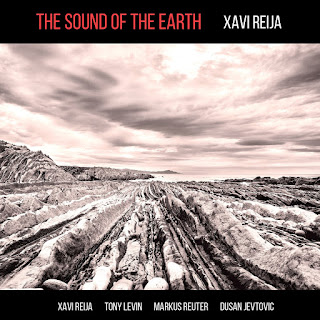 It’s been two years since I’ve listened to Xavi Reija’s music. From his 2014 fifth album of Resolution which was my introduction to his work, and his collaboration with Dusan Jevtovic on XaDu’s Random Abstract, Xavi has brought together another release on the MoonJune label this year entitled, The Sound of the Earth. With Dusan on the album, Xavi has brought along Markus Reuter and Tony Levin from Stick Men to lend Xavi a helping hand on his new release.

When I was listening to The Sound of the Earth, Xavi, Tony, Markus, and Dusan aren’t just band members, but more like a family working together and getting stronger and stronger. There are these structures that go beyond the post-rock sound and some of the bluesy sound thanks to Dusan’s guitar that makes it a very interesting combination.

It’s not only that, but Xavi might have told the band members to go beyond several surroundings and take it as far as they can. From the fourth movement of the title-track you can hear some of the similarities between Ash Ra Tempel’s first debut album as Reuter’s touch guitar sets up this vast, spacious ordeal to go beyond those twisted paths before Levin’s upright bass opens up the creaking floorboards that are getting ready to crack at any second.

Tony’s bass, Dusan’s guitar, and Xavi’s pulsive drum patterns on From Darkness, go into a parallel twilight zone universe that is filled with paranoia and hell like you’ve never seen. Reuter follows suit to increase the temperature level up a notch while the second movement makes you want to close your eyes and experience the beautiful landscapes of Bahia in the heart of Brazil. It then transforms into a twisted electronic avant-garde switch as they have these hay-wiring effects that come into place.

Like a beautiful painting done by Jackson Pollock, Serenity’s echoing effects that Dusan and Markus do, are very haunting towards the Norwegian mountains in the dark. It’s this cross between Terje Rypdal’s Odyssey and Frank Zappa’s Watermelon in Easter Hay, it is bluesy, experimental, and the waves come crashing down at the exact moment at the right time.

There is this aggressive side on the piece, Deep Ocean. It’s between the riffing intros that Dusan and Xavi do by making the waves crash down more on the city. It has this Sabbath-sque intro they walk into before Levin and Reuter come in by making the staircases like a rubik’s cube that becomes more challenging. The Sound of the Earth is Xavi Reija’s vision to create a film score.

Listening to this, I had this vision of him using the music for Nicolas Winding Refn’s Valhalla Rising. But it is one of the most daring releases to come out of the MoonJune label this year and Xavi Reija’s challenge is really getting me hooked into more of what he will come up with next.