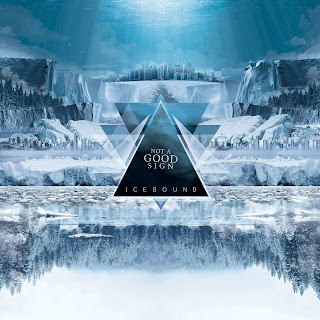 For a band like Not a Good Sign who are still carrying the flames of the Italian Progressive Rock scene, the first two albums are so damn good, I always wanted to hear what they would come up next. And from the release of their new album this year entitled, Icebound, it has this darker and ominous atmosphere. With their third album being self-released, Icebound gives Not a Good Sign to go beyond the temperature that is a freezing snow storm below zero.

And being in the middle of that weather, it is cold, chilly, and uncomfortable temperature. Finding someplace warm, that is a big challenge. From the moment I heard, Uomo Neve, it gives Paolo "Ske" Botta of creating a vision for him to make a score to a video game franchise for the BioShock series. He creates these moody visions from the piano before switching to the keyboards as to show the player of the high-tech cities that were once beautiful, has gone horribly wrong.

Van Der Graaf’s David Jackson makes a guest appearance on the album with Trapped In. He captures the spirit of his sax and flute to a terrifying yet calming composition. With Cassani’s thumping pick-bass before going into the chaotic textures between the Pawn Hearts-era and King Crimson’s Lizard, it transforms into a swirling psych-pop twists featuring some crazy organ work.

You have the moody violins setting up the change of scenery from Eloisa Manera to some Knifeworld-sque sax and heading back down the spiral staircase for some crazy time changes. The search for happiness on Hidden Smile, is not an easy subject. Being in this lonely forgotten area in the middle of the snowstorm, is survival of the fittest.

And throughout the instrumental, Trevisan and Botta send signals between each other to give some of the characterizations for a sign of hope that the clouds would pass through by hopefully seeing a ray of sunshine, but it becomes too late, as it disappears again for some more dangerous weather to come. Botta opens the doors again for the Truth.

He gives the listener to open them up to see through these collateral universes. Calandrielllo’s vocals tugs your heart as if he’s describing the real situations of getting out of the storm while Trevisan makes his instrument to climb up the staircase before the blaring sounds of Botta’s organ erupting and ending with some surreal momentum.

Not a Good Sign’s music for me, is always a challenge. But Icebound has perked my ears up. I’ll admit it this, this might take a few listens, but it shows that while they’ve come a long way, Icebound is not just a grand slam, but a raw and essential snowstorm from start to finish.