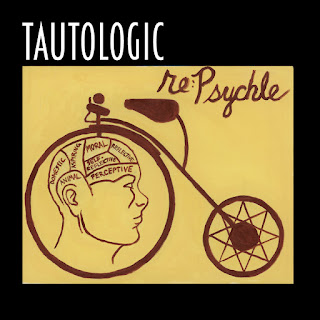 Released on their own label, Turtle Down Music, Re:Psychle documents Tautologic’s Ethan Sellers’ inspiration of the people that he met in his Hyde Park neighborhood in Chicago. It deals with the subject issues of; veteran’s issues, materialism, addiction, mental illness, celebrity culture, and the need for re-connection with nature. The origins of the band’s history goes back 21 years ago.

Ethan Sellers and drummer Pat Buzby both finished college and Ethan himself knew that he wanted to start a new band with friends while he was a student at the University of Chicago. Buzby studied at Olberin. When he read an ad by Sellers from a Prog-Rock discussion group, he knew it was the next move for him. The two of them both have an appreciation of the genre. 18 years ago, they released their debut album West is North, East is South which received critical acclaim both in the States and in the U.K.

Their next release was in 2002 entitled, The Basement Sessions. Then then work begin of Psychle began back after Sellers did a second theatrical piece called At the Apartment which featured songs from other material and The Basement Sessions. But Psychle was almost released, but due to financial setbacks, Sellers decided to archive the album for a decade.

Now in the year 2018, in the form of Re:Psychle, it finally sees the light at the end of the tunnel. It includes from former and new band members to lend both Ethan and Pat a helping hand. On Your Left is a fun-filled composition with a nod towards the genre of Cajun music. You can imagine Tautologic dance-walking a march towards from Treme to the French Quarter in New Orleans.

It’s almost as if they’re doing this song performing at the Preservation Hall and having a big blast performing the composition with organ, horn sections, violin, and sax going through the location to bring a new day. Their nod to the late great John Coltrane, sends towards a Prog-Pop atmosphere with the Coltrane Supermarket.

Beginning with hay-wiring effects of free-jazz sax improvisation and shattered glass and delving into a crossover between ELO’s Mr. Radio and MoeTar’s Butchers of Baghdad thrown in with some background harmonizing scaling vocalizations. Osaka Garden starts with these sirens, telephone’s ringing, and the sounds of an ordinary day in the city of Chicago along with construction workers drilling around the clock.

The lyrics deal with the subject of getting away from the noises in the street and the city into a quiet location to be away from the society with some gentle acoustic guitar and a nod to the Beatles white album sessions. And then there’s The Admiral. It’s perhaps one of Tautologic’s haunting compositions dealing with someone who is watching you and having paranoia.

It has this terrifying scenario that can be disturbing at times of looking outside to see if someone called the FBI, CIA, or the police, or if someone’s trying to take your life. And Tautologic deal with the subject matter brilliantly well. I will admit after listening for about three of four times now, I have to say that I'm not really crazy about this album, but it’s very interesting and a very interesting concept that Tautologic have released. It is ambitious and well-written with the subject matters based on Ethan’s inspirations in his neighborhood. But it's not a bad release at all.
Posted by znathanson at 5:42 AM