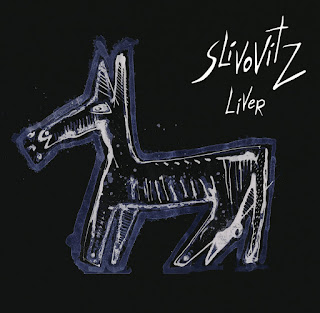 Recorded two years ago at the La Casa di Alex in Milan, Italy except for one track at the same venue on May 25, 2014, Slivovitz showcase the deliver and exuberant performance with the release of Liver. The seven-piece band at the time in 2016, released their third album, All You Can Eat which was their follow up to their second album,Bani Ahead. Listening to Liver, released on the MoonJune label, you have to understand more than just both the Progressive Rock and Jazz world that they brought on here.

Not only they would bring the two genres together, but the elements of ‘70s Funk and Fusion to make you close your eyes and be at the club watching and seeing in awe of cheering and showing support for Slivovitz. Beginning with Mai Per Comando, the sound of Pietro’s tenor sax giving the band doing their nod to the late great godfather of soul, Mr. James Brown and the Headhunters-era of Herbie Hancock, Slivovitz know the funk well.

Pietro channels the styles of Chameleon as if Mel Collins from the Lizard-era of King Crimson came to lend Pietro a helping hand before Derek’s harmonica wails it down as they do a melodic duel. And then at the last minute and 12 seconds, it transforms into a speeding train thanks to Giannini’s metallic riffs to make it through the finish line. From Bani Ahead, Cleopatra Through, the live version beats out the studio version.

You can hear Vincenzo coming in front as he does the bass line introduction. Clocking in at 7 minutes and 30 seconds, this gives electric violinist Riccardo Villari a chance by doing an extended solo. I don’t know if I ever heard it while listening to the studio version, but Riccardo has finally been given carte blanche on his improvisation. The audience are applauding for Riccardo before Pierri, Riccardi, and Stangelo do a stop-and-go moment between harmonica, trumpet, and tenor sax.

Riccardi’s trumpet echoes through the club using the effects on the reverb as if he was inside a cave creating improvisations that are both hidden and haunting on Egiziaca. Alongside Riccardo Villari, Ciro goes through the cave with his trumpet going both up and down before heading towards the light as Perri’s bluesy harmonica and Marcello’s guitar, lay down some blues-rock exercise.

And then, it becomes a mind-blowing finale as it head towards the essence of both Chicago Blues and Hard Rock thumps revved by Marcello in the intro and ending of the piece. The melodic lines between guitar and trumpet come again doing more of the stop-and-go sections in Mani In Faccia. Villari’s violin sets up the quick second beauty before Marcello and Ciro get back into the race for another extended version of the piece from All You Can Eat, but it gets more ideas from the band members to bring it out there from the studio version of the instrumental.

You get to hear the whole team not just hammering it out at the Casa di Alex, but delivering a powerful structure of the composition. Giannini is bringing a lot of ferocious sounds to get the boiling level up a notch. Then, it calms down for the last 20 seconds by ending back to applause. They do a take of Nirvana’s Negative Creep from their 1989 debut album, Bleach, sees Slivovitz going into a Thrash Metal approach of the song.

The sax and trumpet do the melody as it becomes an eruptive take of Kurt Cobain’s song by transforming it between a crossover of the Dio-era of Black Sabbath (Mob Rules period) and the Kill ‘Em All-era of Metallica. I had an amazing blast listening to Slivovitz's Liver. They never done me wrong. I still admire this band so much and after listening about seven times now, I can't wait for the next Slivovitz release to see what will they think of next.

Posted by znathanson at 6:03 AM