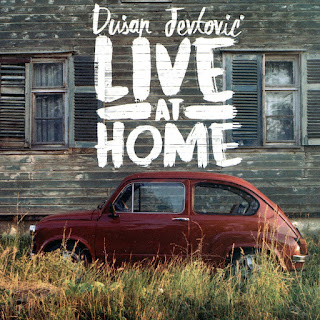 Recorded two years ago at Decije Pozoriste in Kragujevac, Serbia on December 23rd which is Dusan Jevtovic’s hometown city. Released by SKC (Studentski Kulturni Centar) and marketed by MoonJune Records for limited distribution, this live recording contains pieces that were featured in last year’s release of Dusan’s album, No Answer. Jevtovic is aided by keyboardist Vasil Hazimanov who was on the album. And also on here with Live at Home is bassist Pera Krstajic and drummer Pedja Milutinovic.

When you listen to Live at Home, you as a listener, you can feel Dusan’s presence during his performance. Not just listening to whole thing from start to finish, but image yourself by closing your eyes watching and seeing the quartet creating these harsh, mysterious, electronic, fusion, twisted, yet innovative sounds they would bring to the live recording at Kragujevac. The opener, No Answer on here, is giving Dusan a lot of free-rein through his improvisation while Vasil creates these cavernous water dripping vibes on the keyboards.

The intensive atmosphere between Vasil, Pedja, Pera, and Dusan himself runs these sonic surroundings on his guitar as it goes through a small amount of maximum power. But it is Vasil himself who is using this delay/reverb effect, walks you through this film-noir setting of the 1940s in black-and-white as if a crime scene has just happened.

And then, Dusan would go ahead go through picking up the pieces before ending with some harsh minor chords. On Angel/Al Aire-Soko Bira, Dusan goes through some electronic hisses before singing the traditional Serbian song. It is a chilling piece for the first 2 minutes and 50 seconds before Vasil takes the keyboards walking down the styles of the Starless & Bible Black-era of King Crimson as if the creature is walking behind the detectives lurking behind them for the kill.

With New Pop, it is a driving composition. It has this late ‘70s to early ‘80s pop sound that Dusan does. Pedja keeps the engine’s running through the hi-hat and the snare drum. Dusan channels his playing between the styles of both Lindsey Buckingham and the late great Walter Becker of Steely Dan. There’s this cross between Fleetwood Mac, Rush’s Moving Pictures-era, ZZ Top, and Steely Dan’s Aja thrown into the blender.

With Vasil’s composition of Briga, Dusan himself gives him a chance to come forth as the two of them do a melodic duel between piano and guitar. Vasil channels Bill Evans (Miles Davis, Kind of Blue) for the first 2 minutes and 36 seconds before switching to the electric piano by creating a strange and mysterious effect. He goes through various moments to give the other three to climb towards the mountain top.

There are some eerie vocals in the background as the intensity level in the last three minutes to give it a real surprise. And then, there’s the closer, Gracias Y Perdon – Outro. The music suddenly turns into a hay-wiring electronic mode and children in the background screaming for joy as Dusan is almost switching channels to create this shrieking hypnotic effect that pays nod to Pink Floyd’s On The Run.

Live at Home as I’ve mentioned earlier, that you as a listener, imaging yourself being at that concert at his hometown, watching Dusan bringing the audience towards a journey of various genres that is spiritual, amazing, haunting, and staggering. Dusan Jevtovic never disappoints me.

Posted by znathanson at 5:55 AM