Throne of Molok - Beat of Apocalypse 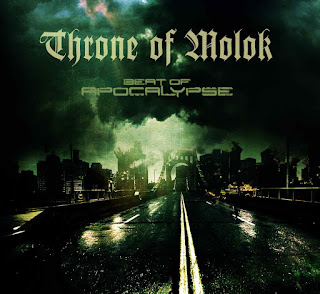 Throne of Molok are a quartet from Palmero, Italy that have a touch of the Industrial vibe that will send shivers down the spines like there is no tomorrow. It’s a combination between Thrash, Death, and Cyber Metal with an extreme attitude that will give you a huge electrical shock and make you take cover on what is to come and what to expect of a band that is blistering and volcanic for the future of years and years in the 22nd century.

Their third album entitled, Beat of Apocalypse released on the Beyond Productions label is the soundtrack for the end of the world and the music is like a powder keg ready to go off at any moment. And the explosion is eruptive and in your face! They have been around since forming in 2004. And with three albums and one demo released along with various line-up changes, this is a group that will get the heads banging at the right moment for a dangerous adventure.

There are ten tracks (two of which are bonus tracks) on here and it is fast-driven, energetic, electronic, and an astonishing punch. As I’ve mentioned about the drums in previous reviews on some of the Metal bands, the drums are in the sounds of a rapid-fire machine gun reigning bullets to attack that go for about 500 beats per minute. Not to mention both the guitars and the synths followed by the pounding metallic bass coming at you with a full knockout drilling galore!

What I like about their third album, alongside the extreme and technical metallic balls-to-the-wall unexpected momentum, it has an aggressive throttle that carry the spirit of Pantera as if they were from the future and creating music for that time frame in the dystopian society that will have jaw-dropping momentum. And the insanity and perfection flows in well like a spark ready to ignite for a gigantic inferno at the right rhythm for the fireball to hit.


This is my fourth listen to Throne of Molok’s Beat of Apocalypse. And I have to admit, while I’m not crazy about their work, this is an eruptive piece of work that the group have unleashed for the attack to begin. So if you are ready for a dosage of Black, Technical, and Speed Metal, then it is time to get your seat buckled on a dangerous roller-coaster ride for the music of the Throne of Molok. Just be warned when you put this bad boy on and turned it up at maximum volume!
Posted by znathanson at 10:58 PM