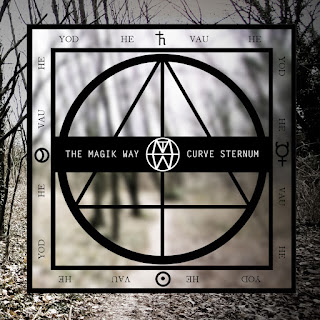 Since forming nineteen years ago in the cold winters of Italy, The Magik Way’s music is a darker and very ominous surrounding ritual of the occult music with an experimental twist. Carrying the essence of Ulver, Devil Doll, and Jacula, This year, they have released their new album released on the Sad Sun Music label entitled, Curve Sternum.

It’s been years and a while since they released any new material since 2013’s Materia Occulta 1997-1999 which was early releases of their work back in the late ‘90s. And now with the return of The Magik Way to rein in more of the occult sound, it seems like it’s a welcoming unexpected momentum of the band to bring in more of what is about to come here.

Folk, Avant-Garde, and Dark Experimental music, it’s everything on this album. Including spoken in a snarling and clean way that is presented throughout the entire compositions. Since I’ve mentioned about the Folk genre, it is a dark Folk-Experimental Metal album that will send shivers down your spine for the instruments to come in to get the goosebumps ready for the right spot.

The clock ticking melody along with the minor acoustic guitar introduction and bass sets the tension for the rhythm that is almost inside the mind of an insane person for I Corpi Peasanti. The droning-clicking tapping sounds from the keyboards and the rumbling, which is evidential on La Mano Raccogile, starts off with a folk-like tradition for the first two minutes and then the drums come kicking in followed by operatic vocals in a stop-and-go surrealism.

The chanting of Yod-He-Vau-He, has an dooming droning surrealism following the basslines, double-tracking vocals, acoustic rhythm guitars, and the sound of a clank that you can imagine them working with Pierre Henry over this piece that would give the classical composers a real shock surprise while L’orroe begins with a bass that resembles the essence of Tool’s music from the touches of Lateralus and Undertow.

The guitar parts are in a waltz-like structure and perhaps one of the most powerful pieces that is on here and then it builds up and up to a climatic finale and then it calms down for the finale for the bass to give it a haunting end. The Magik Way’s music, I will admit, and their new album, Curve Sternum is not easy to listen to from start to finish.


I’m not really crazy about the album, however it would be really neat to see where they would go next for the next roads that will take them into. Am I crazy about them? Not really, but, this is a interesting yet gripping material that The Magik Way have brought on here.
Posted by znathanson at 8:49 AM