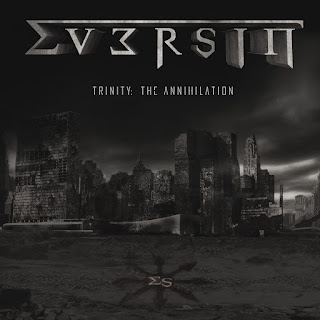 Back in 2013, I was completely blown away by a Thrash Metal band from Italy that carries the essence of the ‘80s sounds of Slayer and Testament. And that band is Eversin. Once from the moment I heard their second album entitled, Tears on the Face of God, I had goose bumps and shivers down my spine the moment I listened to it from start to finish and it terrified me, but completely surprised with its fast-driven and increasing speed that would have given the Nu-Metal genre a big middle finger to them.

This year, they are back with a follow up release on the My Kingdom Music label entitled, Trinity: The Annihilation. The album’s title comes from the code name in which it was used as a code name of the first nuclear weapon as a test run of the first detonation back in the Jornada del Muerto desert in New Mexico seventy years ago. The music itself is the sound of the battlefield and the war itself raging on that is the soundtrack in your mind of a movie set during the Nuclear War.

Almost as if they had done the score for one of the stories in the adult illustrated fantasy magazine of Heavy Metal, Eversin are back in action and they are pulling no punches throughout the entire album and get ready for the head-bangers to get excited and pummeling for more on what they are going to bring. Throughout the rest of the entire album, it’s pummeling, rapid, and like a powder keg ready to go off at any second that will make you leap out of your seat at the exact moment.

And having guest musicians including vocalist James Rivera of Helstar and guitarist Glen Alvelias from Forbidden and Testament, it’s a perfect blend of unexpected momentum to get your seat buckled for a rapid roller-coaster ride of an adventure. The riffs, monstrous bass tones, powerful riffs and solos, screaming and snarling vocals, and dare I say machine gun rapid-fire essence of the drums going off to reign more bullets? For me, I almost head-banged throughout the entire album from start to finish, and they scored another mastermind this year.

Screams for war, and crunching noises from the quartet gives it a surprising touch. I’ve listened to Eversin’s Trinity: The Annihilation about nine times now and I have to say this, I almost couldn’t stop playing this album again and again. And its soon going to be one of my favorite Metal albums so far of 2015. A big hats off to the band and the label, My Kingdom Music for another explosive job well-done.


So if you ready to go to war and if you need a soundtrack to get ready for the danger and watching out for yourself, then explore the mind and eruptive sounds of Eversin’s Trinity: The Annihilation.
Posted by znathanson at 7:34 PM