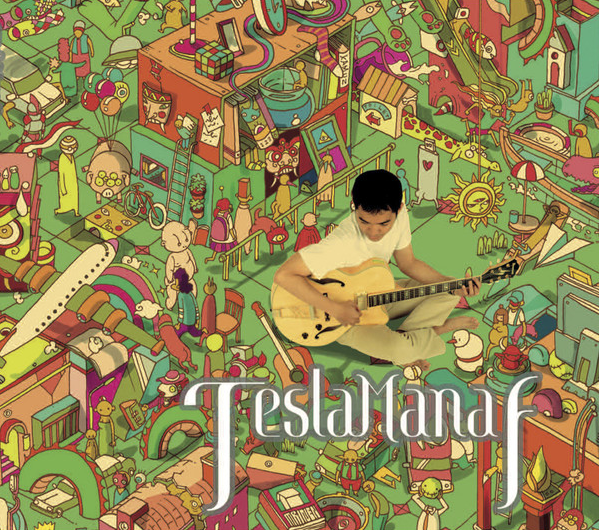 Whenever something from Moonjune Records comes in, I know something special is about to happen that is about to take me into a rocket ship adventure in the realms of Progressive, Avant, and Jazz Rock. And the beginning of this year in 2015, one of the most up-and-coming guitar prodigies from Indonesia is Tesla Manaf. He brings a sound on his instrument that carries the sounds of Wes Montgomery, Frank Zappa, Pat Metheny, Robert Fripp, and John McLaughlin that makes him a; virtuoso, composer, and a musician.

From his dad’s collection of discovering ELP, Gentle Giant, Soft Machine, and the Mahavishnu Orchestra to classical composers like Bartok, Debussy, and Penderecki when he was a kid, Music has been there Tesla since he was born from day one. He’s been playing guitar since he was nine years old and moving away from classical and into the jazz world and studying music theory, Tesla himself shows no sign of stopping and going into different styles of world music with complex time changes and it’s almost as if a jet engine has roared passed very quickly to be prepared for what you are about to experience.

The album released from the good people from Moonjune Records, in which it his international debut, are two of his albums compiled into one.  It features A Man’s Relationship with his Fragile Area released last year and four years ago, he released, It’s All Yours. It begins with a woman speaking in an exciting tone as Tesla plays along with her voice in the melody describing what she’s excited about as it is done in a Zappasque style on the opening title track as it segues into Necrophilia in which it has some intense time signatures as he goes through a rapid virtuosity of the combinations between Jazz, Classical, and Flamenco music rolled and combined into one.

But on Moving Side, its Tesla’s tribute to the Rock in Opposition sounds with the Chamber rock beats to it beginning with a Crimson intense beat as it goes through a darker area inside the caves thanks to the wind instruments setting the scenery before Hulhul’s Terompet Pencak, gives it that alarm yet blaring tone that is something straight out of a Ornette Coleman or Lol Coxhill free-jazz composition that he could have wrote it for either Manfred Mann’s Chapter Three or Univers Zero. It’s intense as Tesla plays it calm and gives Hadis "Hulhul" Hendarisman a chance to shine through his wind instruments by that sound that is intense and not to mention Desal Sembada’s militant drum beats.

The time-signatures keep’s the flow of Tesla’s compositions going. It’s evidential on the medium beat with Counting Miles and Smiles in which it has a loosen beat that shows him going into that laid-back but driven sounds that is unexpected as Rudy Zulkarnaen’s double bass gives that wonderful ideas of the solo that he’s paying tribute to Charles Mingus and Jimmy Garrison as he lets go through the fretless sounds that you as a listener are in awe of what he will come up with next on the solo.

Tesla also shows his Chamber Music side which is really evidential on here. Chin Up has that with the touches of Coltrane in a waltz style as it goes into an up-and-down scale as he and Hulhul do this amazing climatic classical introduction for the first three minutes before it movies into a soothing Brazilian beat as a ballad that you can imagine dancing in the sunset before closing with an unexpected RIO twist while The Sweetest Horn is perhaps soon going to be one of Tesla’s live favorite.

It begins with a militant introduction with a patriotic flute for 37 seconds as Tesla and the team going into a different change of the rhythm. There are some elements of the avant-garde and ominous tones following by a rapid-fire roar between guitar and drums that slows the bullets down for recharge. Not to mention the droning double bass coming with a menacing sound that sends chills down my spine as it relaxes and going into a calming finale.

The 6-part suite, It’s All Yours which was released back in 2011, features the Balienese ensemble, Mahagotra Ganesha, and the piece is about the connections of what humans have to go through relationships they endure. The first part starts off with a calypso beat that reminded me at times of Disney’s The Little Mermaid as the vocalization and the smooth jazz rhythm comes in. It’s not until the sounds of the Kantil shows in up as William Teh Putra and Wishu Pramadi, do a duet between each other as the sounds that resembles the xylophones, create joy and wonder between the both of them.

The second part for the first two minutes and forty-seven seconds, has an ambient/atmospheric surrounding that goes into a combination between Acquiring the Taste-era of Gentle Giant meets Tangerine Dream between guitar, sax, and keyboards setting the landscape and then they move into this lovely ballad in 4/4 time signature as Tesla goes back into a cleaner sound that is loosened and releases the stress and help from the upright bass, makes it an excellent combination.

The fourth movement is perhaps one of my favorites. It starts off with the percussion and chanting that begins very calm and the tempo increases as it kicks into gear in the styles of the Canterbury Jazz sound that has some touches of Hatfield and the North as Tesla is moving his fingers in an increasing beat of Allan Holdsworth and Zappa as well. It’s an unexpected foot-tapping beat that will have your jaws drop to see where he and the ensemble would come up with next.

The sixth and final movement, comforting and its between like a quartet as Tesla gives Gega a chance to come in front circle and shine on his upright bass and its gorgeous like a sun coming up to raise up for a chance to rise up and start the morning off and hitting at the right moment at the exact right moment. And then Tesla comes in as the percussion and drums help him out the beat to give it a radiant finale along with the vocalizations to see where they would drive into next.

Moonjune Records have done something special this year and Tesla himself has accomplished well this year to start 2015 off with the two albums into one CD and after hearing the album about six times now, it is Tesla’s chance to shine for his international debut and here, he has done a job well done. Let’s see what the new year will hold for him and where the road will take not only just him but his band mates and the Mahagotra Ganesha ensemble, would take us next for the years to come and this is only the beginning not just for him, but for everyone that helped him out.
Posted by znathanson at 10:40 PM