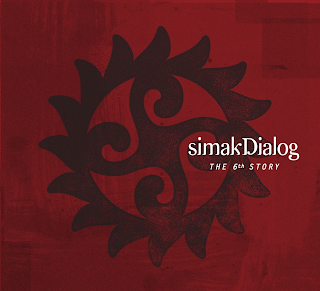 It’s been a good while since I’ve heard some excellent Jazz Fusion from Indonesian group, Simakdialog. They have been laying down the groove of the genre with a touch a Canterbury, Prog-Rock boundaries as they kick into high gear and decide which direction of the musical sounds they would take to follow into the highway while laying down the groove and the tempo.

The follow up to 2009’s Demi Masa, The 6th Story is another wonderful experience to sit through and enjoy the music and the Sextet have unleashed another home run for a laid-back yet adventurous Prog-Fusion beauty. Opener, Stepping In, is a 10-minute epic featuring Riza Arshad’s wildly keyboard improvisation and featuring Tohpati’s melodic guitar lines and percussion sounds of Endang Ramdan and Erlan Suwardana.

Like the crazy time signatures along with stop-and-go moments, it is a knockout.  Riza is doing this Rhodes-like solo in the styles of Herbie Hancock and Mike Ratledge along with a Canterbury twist as if he is paying homage to the Soft Machine’s later years while Tohpati is going off the wall creating this Fripp-sque feedback yet haywire effects on the guitar that is insane.

Lain Parantina is Riza and Tohpati’s concerto-like surroundings that has a Cosmic Voyage beat as the percussions get into a dramatic tension as both Riza and Tohpati and bassist Adhithya Pratama comes in with some Hugh Hopper lines as each of the pieces come in together like a thunderstorm. Harmologic is another haunting keyboard/bass/guitar composition as more of the tension, comes in full swing as it captures the essence of ‘70s Jazz Rock sounds of Return to Forever as if it was recorded for the sessions of Romantic Warrior.

Then, everything becomes this middle-eastern downbeat tempo as Tohpati is going into some Bluesy territory and shines on as if he performing this composition in front of the Royal Indonesian family as they get a kick out of What Would I Say?  Elsewhere, For Once and Never has this Film-Noir like score as if this was recorded for a movie set in the late ‘30s/early ‘40s set in Black and White while Common League goes into the Rock in Opposition mode in the homage of Samla Mammas Manna, Frank Zappa, and the Attahk-era of Magma in a quirky yet catchy and fast-driven beat.

As Far As It Can Be (Jaco) is a tribute to the late great bassist from Weather Report and solo artist, the virtuoso Jaco Pastorius. Its very pastoral, haunting, and emotional as Riza and Pratama go into a keyboard-bass beat as if we are walking in the streets of the Jazz Clubs in the Big Apple at Midnight and hearing the sounds just pulls your heart and makes you wonder if Jaco were alive, he would have gotten a real kick out this piece.

5, 6  goes back into the Canterbury Prog and Electronic vibrations. Riza is going through the funky wah-wah vibes and moogy adventures and is going into different directions and doing this wildly experimentations. At times it’s a combination between King Crimson’s Red-era, Hatfield and the North and Matching Mole rolled up into one and you begin to understand how they can take both the Jazz and Prog genres by taking it up a notch. The closer, Ari, is a relaxation and dance-like composition.

It’s more of an Indonesian Bebop Jazz sound while Riza moves away from the keyboards and into the Grand Piano. He goes through this wonderful improvisation and does it in the styles of Thelonious Monk, Wynton Kelly, and McCoy Tyner and he just goes with the flow as if the masters of Jazz Piano are watching over him to give him the thumbs up in heaven.

The 6th Day is another cornerstone is Simakdialog’s musical career and 20 years later, they still have the power and the touch of their sound and vision. And again, hats off to Moonjune Records releasing this unbelievable album, and getting the beauty to come at you out of nowhere, is an unexpected special treat for Jazz and Prog lovers.
Posted by znathanson at 5:20 PM