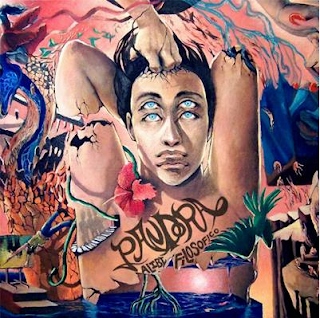 When it comes to Italian Prog, you can expect the unexpected. Bands like; Museo Rosenbach, Le Orme, Banco, I Giganti, and the legendary Premiata Forneria Marconi, were ahead of their time in the ‘70s and took the sounds of the British Prog genre and kicked it up a notch and the sounds of Classical Music, Jazz and bits of Theory in there with storytelling complexes makes it a mind-blowing experience.

Today, the new generation of the Prog genre is like a breath of fresh air. And one of the bands that are following into the footsteps of the bands is a group called, Pandora. The band has been around for eight years and they released two albums from 2008 (Dramma di un Poeta Ubriaco) to 2011 (Sempre E Ovunque Oltre il Sogno) and now this year, they released, Alibi Filosofico (Philosophical Alibi). Bits of Metal, Prog, and Avant-Garde thrown in there and guests including Dino Forre of Il Castello Di Atlante, Arjen “Ayreon” Lucassen on keyboards and David Jackson of Van Der Graaf Generator on saxophones, makes it an excellent combination.

Opener, Il Necromante, Khurastos E La Prossima Vittima, a 10-minute epic, begins with the rain, and the rumbling monster roaring before it kicks into a Progressive Metal powder keg that hits off like a big bang.  Throttling and classical guitars, ghost-like vocals, folky, time signature difficulty, fast vocals, and heavy riffs, it is a perfect combination. Then, there’s the keyboards, that is a combination of Rick Wakeman and Keith Emerson role up into one that is almost like a concerto with swirling synths and mellotrons, bit by bit, piece by piece, it is dramatic and suspenseful to get you ready for an amazing magic carpet ride.

Ne’ Titolo Ne’Parole, begins with an homage to Steve Hackett’s Voyage of the Acolyte-era with female vocalizations and classical guitar lines that has a Renaissance feel for the first minute and forty-four seconds before it descends into a Deep Purple crescendo as Arjen goes into his tribute to Jon Lord on the keyboards. Then, all of a sudden it goes into the Classical Renaissance Folk Rock boundaries again as guitar, vocals, and organ reach from slow to a high climatic celebration with a dramatic finale as Arjen takes into a higher yet soaring surrounding.

And he and Beppe are showing they’re might and giving a lot of voltage on the instrument to see who can come up with the best solo while Claudio does guitar lines before the track fades out, which I wish they could have done some more to give it another dramatic finale. La Risalita features Claudio doing this concerto on the grand piano that is very pastoral and has a lot of ambient and atmospheric voyages that makes you wonder that it could have been used on Klaus Schulze’s Irrlicht.

Then, there’s another epic. The 11-minute, Apollo, features David Jackson of VDGG doing some Free Jazz intro on the Sax as if he’s paying homage to John Coltrane and Lol Coxhill before it descends into the sounds of Tom Newman’s territory, a-la Faerie Symphony style for a few seconds before David comes in to create a nightmarish terror. It transforms into a tribute to Van Der Graaf Generator meets Magma meets Luca Turilli’s Rhapsody rolled up into one that is a crazy and wildly improvisation on the Greek storyline.

Tony il Matto, is a Jazz-Waltz in ¾ . Even though it’s done in the style of John Coltrane’s My Favorite Things, Beppe does his Thelonious Monk-like tribute on the Piano as David improvises as a flautist going through various sax instruments to pay tribute to Coltrane and Crimson’s Mel Collins as well while Sempre Con Me goes into an epic and theatrical tempest. The instruments collide into one with guitar, organ, vocals, and back into the rural sounds as the story has a tragedy in the styles of Shakespeare and the stories of tragic heroes/loved ones who go out in a blaze of glory or die in their arms and go into the heavens to remain as one. The closing title track is as symphonic as you can get.

Fanfare, emotional, spiritual, hypnotic, and breathtaking, each of the complex structural that were part of the missing puzzle, finally come as one. Touches of Spacey Prog, Psychedelic, Orchestral, they come in at the right time at the right place at the exact moment they needed in their grocery list to close the album off to give it that sendoff.

This is my introduction to Pandora’s music and I have to say I’m completely taken away from what I’ve listened to. I have listened to their third album, twice already and it just knocked me off my socks. So if you admire La Maschera Di Cera, Unreal City, and Nodo Gordiano, then Pandora is the band that you must listen to and Alibi Filosofico is one of the most explosive and mind-boggling albums to come out this year.
Posted by znathanson at 9:46 PM