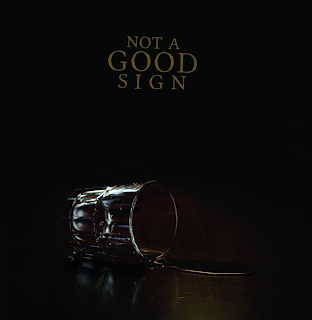 Not a Good Sign is an awkward and strange way to name a band, but it works well. It’s a studio project that started three years ago featuring Paolo “Ske” Botta, Marcello Marinone, and Francesco Zago to name a few and they are from the AltrOck/Fading family and they pretty much unleashed their sole self-titled debut album released this year and it’s a combination of Eclectic, Italian, and challenging Prog-Rock like no other as they put their toes deeper into the waters of the genre.

Their debut is more an eruptive volcano that is waiting to explode at the right moment at the right time to get an example on when the lava is going to hit, in particular the opening 2-part epic, Almost is a time-changing difficult complex composition that combines the sounds of King Crimson meets The Mars Volta that is rolled up into one to create a dynamic and electrical vibe before it calms down into a jazzier ballad.

The second part is more a relaxation featuring gentle-like vocals, doomier guitar lines, Monk-like piano beats, and soaring Mellotron beauty to get the angelic voices come in which is the Moog setting the mood and vibration of the arrangement. The title track is a bit out of this world. Filled with chaos and dystopian beauty, it provides a magical structure of the Synths, Hard Fripp-like riffs, and the haywire effects to capture the scenery turned relaxed mode at times that resembles of A Trick of the Tail-era of Genesis.

The cavernous watery drips on Making Stills, has this ambient atmosphere from the keyboards to make it a joyous and lush-like beauty that is very dance-like on reflecting memories from the past and present before kicking into full gear in the styles of the Canterbury Prog sounds as they go into fast-driven mode in the style of the symphonic band, Camel, which flows through the last three minutes as a jam session to get your feet stompin’ before taking center stage with an alarming climatic finale that is unexpected.

Witchcraft By a Picture is homage and a tribute to the overlooked British Acid Folk scene of the 1970s as it goes through the styles of; Trees, Mellow Candle, and Spirogyra featuring gentle acoustic lukewarm crisp guitar along with spooky female vocals in the style of Celia Humphris while Coming Back Home is back into the swing of orchestral structures with a moody and hypnotic touch of emotional, uplifting, and soaring into the heavenly clouds to get a roaring value.

The haunting Flow On, has this ‘80s vibe as it begins with Rhodes, Guitar, and a string quartet and bits of the Synth doing a mourning solo, which is almost a resemblance to Radiohead’s Talk Show Host. Of course, the soaring vocals, militant-like sounds between bass and drums, and the effects of the synths setting up the tempo is a vibrating chemistry to see where the road is taking them.

The Deafening Sound of the Moon, which sounds like a sci-fi movie that could have been released in 1976, goes back into the Crimson and Arthur Brown’s Kingdom Come mode in full swing. There are sharp Organ sounds, narrative-like vocals, Mellotron voyages, and at times the vibes makes you wish that they could have written the score for Logan’s Run.  The closer, Afraid to Ask, is almost a calm after the storm that begins with a lullaby introduction.

And then the electric guitar comes kicking in along with the cello, to give it a morning to remember as you can imagine the sun coming up in the horizon and this arrangement is a perfect to close the album off with the curtains coming down and cuing the thunderous applause.

I have listen to Not a Good Sign’s debut album about four times already and so far this is not just a Progressive Rock band, nor a supergroup, this is a band that should get some recognition they really deserve through the independent and underground scene to receive word-of-mouth. This is a knockout debut and if you fancy the sounds of Camel, King Crimson, The Mars Volta, Genesis, and Trees, then I highly recommend Not a Good Sign.
Posted by znathanson at 11:37 PM