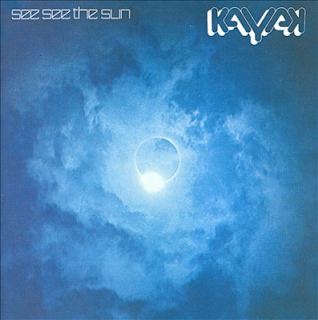 The scene in the Netherlands has been quite a massive treat for Prog Rock fans to sink in their hands with of looking at some of the overlooked bands that never got any achievement in the states and were ahead of their time. But they received cult status and word of mouth status from bands like; Focus, Golden Earring, Alquin, Earth and Fire, and Canterbury’s twist with Supersister. But from the outskirts in the European country, is one of the most overlooked and obscure bands to come out of that area filling with Symphonic and Pomp Rock in the ‘70s and that is Kayak.

Formed in 1972, this five-piece band came out of Hilversum by Ton Scherpenzeel and the late great Pim Koopman, played in various band before forming Kayak. Alongside Scherpenzeel and Koopman, there was also Max Werner on lead vocals and percussion, Cees Van Leeuwen on Bass, and Johan Slager on Guitar and together, they would create something that supernatural, thrilling, and captivating beyond the listener’s imagination.

And their first two albums, See See the Sun and their sole self-titled second album, re-mastered by the people at Esoteric and a well-researched liner note done by Wouter Bessels, contributor for the Dutch Progressive website, Progwereld, who’s done the Earth and Fire, Machiavel, and Alquin catalog to name a few, has done a spectacular job doing investigating about Kayak’s music about how they came to be and marking the 40th anniversary of their formation. Still, since they began, Kayak’s music still freshens and crystallizes the structures like no other.

See See The Sun, their first album, originally released in 1973 on the Harvest label which was home to Barclay James Harvest , Edgar Broughton Band, and Pink Floyd, starts off with the sonic driven introduction of finding your dreams on Reason For It All.  Featuring a concerto like intro done by Scherpenzel on the piano while Slager’s heavy guitar chords is right in your ear as if he’s paying tribute to Steve Howe as Max Werner’s vocals is right behind you telling a story and then it becomes this classical orientation in the midsection to come jumping at you with its homage to the Fragile-era from Yes.

The heartfelt ballad on writing a song with Lyrics, has its touching elements, mellotron and romantic positions that tells you that writing the first letter in the alphabet is not always easy as Cees Van Leeuwen comes in to shine with his Rickenbacker on doing some thumping bass lines as Pim Koopman takes over the vocals dealing with the mystical and greek mythology on a ship to the crew members and who you can trust and getting out of the sinking boat in this mini humoristic opera drama on Mouldy Wood.

Elsewhere, Lovely Luna is a moody and spacey haunted folk tale about a dream which resembles Ramases Glass Top Coffin-era with some wonderful acoustic minor chords and mellotron touches as Pin’s vocals has this spooky double-tracked vocalization, but then it turns into a dramatic rocking punch filled with sinister guitar lines, swooping synths, mourning organ and soaring background vocalizations and then back into the Gothic Folk finale. Hope for a Life is a pre-AOR powder keg on who it’s hard to tell the truth and thinking on what is right and what is wrong.

The haunting and disturbing fairytale on Ballet of the Cripple, which is about a one-legged ballerina, feels like something straight out of a short story of the Weird Science and Fantasy comic books in the 1950s. But the piece has some cathedral organ mellowing atmosphere, carousel music gone wrong, and structures of 10cc’s The Original Soundtrack-era and PFM’s Storia Di Un Minuto in there as well with a terrifying view on how its messed up it to sell millions and adoring its showcase.

Forever is a Lonely Thought offers a gentle folk ballad turned into a space-age elevated beauty while the bouncy vicious attitude of Mammoth featuring a Barrel Organ which was unexpected for a band to use a street instrument that was used for a small animal like a monkey for example, to do tricks and would make attention for audience to see what they would do, here it’s a weird and fun track. And while the stirring finale of the title track featuring an accordion in which they used for the ballad Wintertime, has a very fantasy musical element in there as the bonus track for their single, To Write a Book, contains parts of early Genesis, Gentle Giant, and King Crimson. 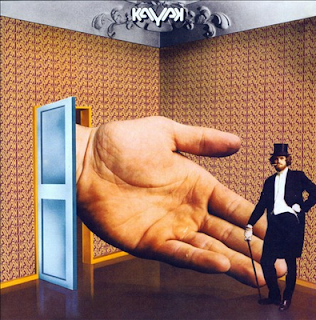 Kayak’s sole self-titled second album, which original title was, His Master’s Noise, but rejected by EMI in London, released in 1974, saw the band going into the waters of the mainstream, but staying true to their roots.  Still carrying the elements of their first album that echo the Progressive-Pop and Rock sounds, it was more science-fiction and mellowing at times to feel that you are in a world of the unknown.

But with a lot of the orchestral sounds still in there that resemble the Irish Symphonic band, Fruupp that could have been a trademark with Kayak’s music on Mountain Too Rough and the fiery opener, Alibi showing the band going into more of an AOR (Album Orientated Rock) approach. Serenades seems like it was recorded in 1980 and resembles Queen and Rush working together on Permanent Waves while the 6-minute epic, Trust in the Machine shows Kayak going into a Space Rock adventure into the solar system and across the milky way.

The bonus track, which are the A & B sides of the singles, are quite fun. You have the ‘70s Glam Rock humor in there with the foot-stomping single We Are Not Amused about an evil computer trying to take over the world, but it’s taken down by its followers who felt they were ratted in by the machine itself as Give It a Name is another whimsical tune. This one is very interesting: dealing with the contracts and how the music business wants a hit commercial single with a touch of calypsos and has a Jazzy and Soul feel on how you can get trapped in the scenery with no way out.
Posted by znathanson at 7:00 AM