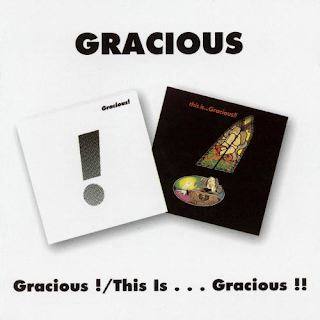 For those who are familiar with the sample that Andy Votel had done on the Vertigo Mixed compilation back in 2005 for some of the obscure gems from the 1970s, one of the most lost and unknown bands to come out of the Vertigo-era was a little known band called Gracious. Formed in 1968, they would go into darker and haunting territories in what King Crimson were doing after playing a bill with them back in which member Martin Kitcat was blown away from what he was hearing, he decided to get a mellotron and created some mythical and mysterious beauty on the keyboard to make it the Gracious sound.

And while they released only two albums, from Vertigo and on Philips in 1970 (Gracious!) and in 1971 (This is…Gracious!!), they could have given The Nice a huge run for their money. From the explosive opener, Introduction, which has a very catchy beat between the sounds of; Rhodes, Harpsichord, Guitar, and Drums including some wonderful vocalizations and some classical backgrounds to make it very 17th century with a psych-hard rock adventure.

While Heaven goes through this Moody Blues phase between Organ and Mellotron atmosphere and then go into a folk-like sing-along finale that resembles Tuesday Afternoon, the vicious explosive volcanic eruption on Hell that Kitcat does is create this dooming beauty as it calms down while vocalist Paul Davis vocalizes as the band follow with him with their background work, he sings the line “Three foot down underground/ Your within, Living Sin/Hell is Sayin’/Breath away, Yeah!” As it closes with a Ragtime ending that sounds like the 1920s at a bar that resembles with a humoristic grand old time playing Scott Joplin-like feel on the Piano a-la Salad Days period style with the Can-Can.

But it’s the 17-minute epic, The Dream that is the killing centerpiece. Featuring a rumbling intro done by guitarist Alan Cowderoy and drummer Robert Lipson doing this screaming sound on the piece, followed by an homage to Beethoven’s Moonlight Sonata, it goes through various phases from a Lullaby, Nightmarish Dystopian world, Beatles-sque homage on Hey Jude, and some interesting dramatic time-changes to make it at time Bluesy and Jazzy with Spoken interludes that would set the tones into a tightrope and not knowing when the cable is going to snap.

However on their second and last album which included a wonderful gothic cathedral cover, it proved to be one of the most disturbing and beautiful obscure gems ever. Starting with the 24-minute epic, Super Nova, in which is in four parts that has a sci-fi storytelling that resembles straight out of Ray Bradbury’s The Martian Chronicles that is terrifying.

At times it has riffs from the Mellotron and Organ, driving into Jazz and Blues town, Emotional Folky ballad, and then back into the climatic finale to meet their maker that you never expect to happen. It is a wonderful epic along with the funk jazz rock tribe of C.B.S, the homage to Barclay James Harvest on what went wrong on What’s Come to Be while the Who-like Pete Townshend intro turned mellowing groove on Blue Skies and Alibis is laid back, and the Straightforward Rock finale on the acoustic guitar and piano/mellotron on the soaring Hold Me Down.

While they have split, it would have been interesting to see what they would have done next, and 41 years later, they were ahead of their time and are one of the most unknown influences in the Prog universe. And if you want proof, just ask Damon Fox of Bigelf.

Posted by znathanson at 7:04 AM