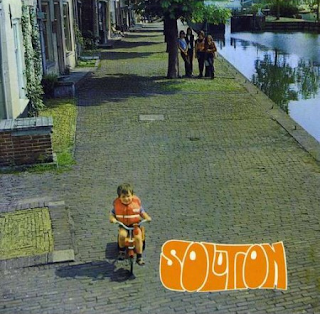 When you add a dosage of the Canterbury Scene, and the Jazz Fusion scene in the golden-era of the ‘70s into the mix, you know you might be in for a special treat from the realms of the Netherlands. All thanks to Dutch Jazz Rock band, Solution who had their own musical influences with those three genres and created something beyond their wildest imagination. Formed in 1970 in the city of Groningen, which is one of the largest cities in the Netherlands, home for the Music and Theatre scene and a College University as well, this four-piece band would do improvisations that was coming out of the English music scene during the late ‘60s and with the release of their sole self-titled debut album, could be considered one of the most lost treasure albums that is finally deserving some recognition.

The band recorded their debut album for a three-long day session and it you could tell it was done very quickly and showed how they can go through various time changes and can take the listener on an amazing journey that they ever dreamed of beyond their wildest imagination from start to finish. In the four-piece, it considers Tom Barlage on Flute and Sax, Willem Ennes on Keyboards, Peter Can Der Sande on Bass and Vocals, and Hans Waterman on Drums.

Most of the time, it feels like it was recorded for a wild experimental film that could have captivated for a midnight movie and received cult status. For example, the crazy and humoristic fun climatic with mariachi yelling turned into a mellowing Traffic-like sound from the John Barleycorn Must Die-era with Circus Circumstances which has a Funky flavor, showed that the band could write music for the Ringling Brothers and would have given Cirque Du Soleil, a huge run for their money with their crazy antics and imagine writing this for the theme piece for the Benny Hill show.

The 12-minute phantasm composition, Phases, shows keyboardist Willem Ennes his moment to bring an unusual nightmare turned into transcendent atmosphere on the keyboards as he goes through this evil touch throughout the organ for the first two minutes and then the last eight minutes of the piece, it goes through a doomy momentum into a tender finale as vocalist Peter van Der Sande sings his heart out.  The opener, Koan is a thrilling introduction.

It has this crazy Jazz Rock momentum that goes through this stop-and-go response on the bass, organ and percussion while doing a bossa-nova samba routine as if it was written by Thelonious Monk and Ian Anderson by doing an homage to Jethro Tull’s Stand Up-era as a climax while the 10-minute suite, Trane Steps, is a tribute to John Coltrane. Not only they do this, but they let him know through this transcendent meditation between instruments to pay homage and respect the musician who was completely ahead of his time as if it was sequels to Giant Steps, My Favorite Things, and A Love Supreme for a lot of Acknowledgement to the master himself.

The people from Esoteric had scored another home run to get the rights for the first two Solution albums from the EMI-era and it seems they are headed towards the right direction releasing this unsung gem with excellent liner notes, pictures of the band, and a history of their career from 1970 until their break up in 1983. A must listen to album in the history of overlooked and obscure Jazz and Progressive Rock to get into.
Posted by znathanson at 11:14 PM