Heart of Cygnus - The Voyage of Jonas 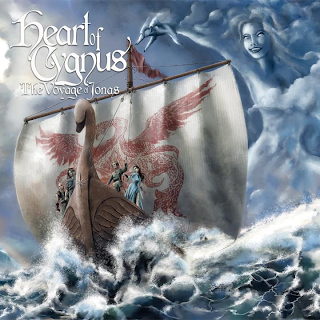 It’s been a while since the new kings of the Power Metal and Prog scenes, Heart of Cygnus have put out another concept album since 2009’s Tales from Outer Space! The reason they were busy because they’ve been putting together another concept album based on the Voyages of Jonas. The music has changed a bit from the time they started out as a duo and researching from science-fiction/fantasy, comic books from the DC and Marvel Universe, and Ayn Rand.

With the sounds of Queen, Iron Maiden, Kansas, early Styx, and Rush in their sound would have finally given Dream Theater a gigantic run of their own money, and from the time of my support in their sound of the Progressive Metal community on how they have finally come in full circle, it is a huge credential they have in their marks. More of the merrier, the music is amazing including the artwork which plays it like a movie from beginning, middle, and end for epic proportions.

With its narration and feel of the rock opera format, The Voyage of Jonas starts off with the epic scoring metal driven introduction of The King is Dead as it segues into Jonas by proving what Heart of Cygnus does best. It’s a hard driven metallic exercise featuring melodic piano work, synths and Brian May-like guitar style, makes it a perfect fitness workout session. At the Portside Inn is a soft turned monumental fantasy rocking tune.

The early Queen sounds are mind-blowing from hearing Jeff’s guitar work as he goes from soft to hard-edged as if he was listening to the first five albums for inspiration to fit the Heart of Cygnus sound and not make it too retro, but in the hearts and minds of the Power/Prog universe as it fits the atmosphere of the album. A sailing adventure of sing-along proportions, Sailing North has a catchy background vocalization, powerful drum patterns, keyboards, and killer vocal lines.

Meanwhile, At the Fjords is stepped into the dramatic film score sound between keyboards and guitar with a bit of the militant metal sounds that is pumping and dramatic while To the Abyss of the Dragon is stepped into the shadows of the AOR (Album Orientated Rock) sounds of the late ‘70s with a touch of Boston meets Black Sabbath’s Paranoid sessions. The sound here has a touch of Doom Metal guitar lines in the realms of Lifeson and Iommi on rhythm and lead guitar lines as Jeff brings an explosive work on the guitar with a wonderful touch on the lyrics.

Getting into the Dungeons and Dragons lyrical storytelling, When Wargs Attack, could have been a part of the second Queen album and it is as epic as giving Tolkien a warm handshake. Drummer Jim Nahikian really has a lot of spirit when it comes to metal drum players in the history of Power and Progressive Metal. He not there to be center of attention, he’s there to let the members know that he’s battery charger and it goes up to 100 volts.

Fading and Siren Song are more of a melodic gentle acoustic ballads as The White Witch with its tribute to the Mellotron that Jeff does on the keyboard with its dramatic sound along with the guitar lines, has a lot of energy and strength of mystic and volcanic explosions to go along with it to make it powerful and momentum at the same time. The Mage delivers some wonderful guitar virtuosity as Into the Storm goes into the styles of Rush and ELP’s keyboard work that could be a fan favorite in their live concerts.

The Isles of Ice and Procession of the Damned provides more of the Fairy-Tale-Fantasy-Rock sounds that Heart of Cygnus would write an operatic song for an Evil Queen and bowing down to her with the lyrical details on how she rules with a mighty fist in the coldest part in the ocean and reading people’s mind and making them have a nervous breakdown as the music sets the tension and anger from the power she gives to terrorize the heroes while Now To Your Ships is the aftermath in this haunting and moving waltz ballad with a psychedelic slide guitar sound that is a direct tribute to the Beatles.

It’s the last track, Moonrunner that is hypnotic and very powerful that is soon going to be a live favorite from the band themselves. This is Power Metal to the core and it shows how Heart of Cygnus present their music not just in the Hard Rock sound, but really going for the goal and presenting it in a sing-along rhythm that makes it awesome and unraveling mysterious beauty until the very end. The Voyage of Jonas is one of the most eruptive albums I’ve heard and it keeps on growing every listen that makes it a spiritual journey.

Should it be album of the year for 2012? I don’t know, but it’s something that most of the Prog and Metal community must take notice of and deserve a huge light at the end of the tunnel.

Posted by znathanson at 1:00 PM

HoC rocks and I can't wait to get this new album! Nice review!