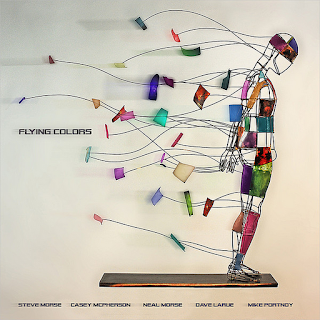 The road to reconciliation can be both a spiritual journey to find out the real you, and a rough ride as well. And for drummer Mike Portnoy, who left Dream Theater back in 2010 to pursue other projects including Avenged Sevenfold and another project, Adrenaline Mob, has teamed up with one of the most up-and-coming supergroup’s to come out this year with a wonderful debut album from the collaborations between members from; Dixie Dregs, Spock’s Beard, and Transatlantic to name a few, it proves to be a wonderful match made in heaven, and the name of the band is Flying Colors.

In the band, it considers Steve Morse on Guitar, Neal Morse (not related) on keyboards, Casey McPherson on lead vocals, Mike Portnoy on drums, and Dave LaRue on Bass Guitar. The sound of their music is combination of Hard Rock, Progressive Pop and Rock, Fusion, and Psychedelia sounds that resembles of the late ‘60s and early ‘70s that makes you feel that you are right there with the band and seeing where they are going into with different genres of the Prog universe from beginning, middle, and end.

From the opening chattering between both members on how they were going to start the opening composition, they go into a thrilling yet wonderful adventurous alternative rockin’ ride on Blue Ocean as LaRue and Steve create some beautiful lines on the bass and guitar while Casey lets it out on his vocals as you can imagine the surfers headed towards the beach and surfing through the crest of the wave. Shoulda Coulda Woulda has this raw and fierce energetic heavy metal attitude that almost could have been used for an opening theme song for one of the action animated series from Japan that would hit the charts with a bang!

Elsewhere, Everything Changes, Kayla and The Storm moves well like a romantic ballad as Casey goes through his moving voice as the band helps him out with a helping hand while Dave LaRue lays some funky bass lines as Steve Morse goes into a storming rhythm and heavy riff though his guitar on Fusion Metallic touches on Forever in a Daze with an eruptive beat. Love is What I’m Waiting For meanwhile, has this ‘60s Baroque and Beatlesque sound that feels like that was left off during the Sgt. Pepper sessions as they pay tribute to the fab four as the moving Better Than Walk Away which features some wonderful background vocals and a touching keyboard and guitar work done Neal and Steve Morse, sounds like a sequel to Gentle Giant’s Think of Me With Kindness.

Then everything becomes a charging thumping voltage electrical thunderstorm on All Falls Down has this ball out arena rock attitude with a dosage of Queen’s first two albums and Medieval story-telling momentum that should be a fan favorite while the warm sunset sounds of the Beach Boys movement that is warm and bluesy at the same time on Fool in my Heart. Then it all comes down the final 12-minute epic, Infinite Fire.

From the moment you hear this composition, it shows that they can take the Prog genre up a level with the touches of Symphonic, Atmospheric, and Spaced Out stories that both the quartet can close the album out with a lot of heart and shooting for the stars to see where Flying Colors would go next. Now is it a great album? No, but it’s a start and seeing where they would take the Yellow Brick Road to.

Posted by znathanson at 8:14 PM