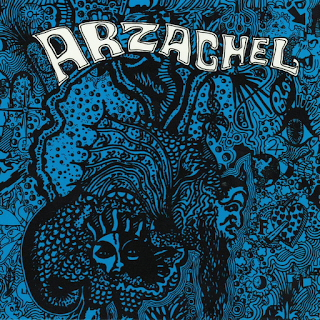 Arzachel’s only sole self-titled debut album released at the end of the ‘60s in 1969, is one of the most rarest and obscure progressive rock albums to come out of that time period and yet it is one of the most haunting and doomiest albums I’ve ever heard from a quartet. Before there was Egg and guitarist Steve Hillage who would leave the band to form the short-lived band Khan and join up with Daevid Allen with Gong, he along with Mont Campbell, Dave Stewart, and Clive Brooks, were completely ahead of their time and could have made something special with this band.

While this is their first album, it would have been amazing to see what Arzachel would have done if they would have continued as a four piece and could have recorded scores for the Hammer Films and the Italian Horror genre of the ‘70s. At times of hearing this from start to finish, it’s very Space Rock and Sinister at the same time almost as if it was recorded as the soundtrack to Ray Bradbury’s 1962 classic, Something Wicked This Way Comes.

The album kicks off with the organ roaring introduction Garden of Earthly Delights, that has a pastoral edge to it that the song pays tribute to the painting done by Dutch artists Hieronymus Bosch while the dystopian yet gothic-like sound of Azathoth sends shivers down your spine between Mont’s operatic voice and Steve vocalization of the Cthulhu stories from H.P. Lovecraft followed by Stewart’s vicious Organ sounds filling the atmosphere. It’s very sci-fi and very moving and terrifying at the same time to sing about a disturbing creature from Outer Space.

Meanwhile, Queen St. Gang has a mellowing jazzy groove as Dave lays down the beats on the Organ to do a beautiful solo while Clive Brooks calms the beat on the bass drum and the snare to give it a beautiful jam session. Leg and the 10-minute Clean Innocent Fun, both have a very interesting kind of arrangement. They go into Blues Rock town in the sounds of the late Yardbirds and Cream period in a rumbling volcanic eruptive format as Steve sings his heart and plays his guitar out in this medieval hard rocking proto-metal-freak out session format.

All comes down to the 16-minute Metempsychosis, which in definition means the passing of the soul at death into another body, is an Avant-Garde Space Rock adventure into uncharted mass territory of a score that could have been used for the last 23-minutes of Stanley Kubrick’s 2001: A Space Odyssey. Starting out with the elements of Pink Floyd’s A Saucerful of Secrets instrumental and The Nice’s music, they go into a psychedelic sessions that is far beyond the galaxy as Steve Hillage and Dave Stewart, who does his homage to Keith Emerson with feedbacks and crashing the organ with a bang as if it had arosen from the dead, do a duel between Guitar and Organ as they go beyond the infinite.

All in all, it is one of the adventurous pieces in Progressive history that is not for the faint of heart. But if it was done for an alternate soundtrack to 1974's Zardoz starring Sean Connery, you would be completely blown away by the time you hear this from start to finish.