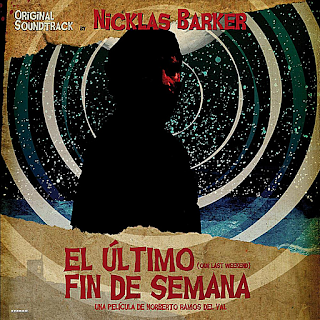 More like a combination of the duo Zombi meets the Italian prog maestros of Horror film scores, Goblin, keyboardist and guitarist Nicklas Barker from Ankedoten has finally come a long way and it proves that his inspiration from Goblin, would later get him a chance to do a horror score. He isn’t doing this to embark on a solo career, he’s doing this because he enjoys it and the soundtrack to El Ultimo Fin De Semana (Our Last Weekend), a story about four friends to go to one of their grandmother’s house in the village, but it is filled with secrets that would divide them, annihilation, and the barriers that it would be their last weekend.

Now when you think of the plot line, you probably may think of Suspiria meets El Topo meets Romero’s Living Dead trilogy, and what Nick has done he has combined the three elements and settling into a haunting yet twisted psych-prog late ‘70s, early ‘80s score like no other with a little bit of a touch of early King Crimson, gothic structure background work, and the disturbing stories from the realms of Edgar Allen Poe and HP Lovecraft. There are some eerie structures on the album that would send a shiver down your spine like the screeching scream of nightmares on Sisters/Phantasm.

There’s a bit of Museo Rosenbach in there, but with a haunting mellotron string sound sets the trees in shaking roots as if they are about to explode as it goes into a chaotic avant-garde noise of almost doors slamming and a little bit of whispered voices that is very hallucinated. Sonically, he goes into a ballad that is almost sending a warm feeling of emotions that sort gives a call and crying out with Celestial Ghost and the mellowing Rendezvous that is very strange but twisted at the same time that is almost left off during the sessions for Kubrick’s 2001: A Space Odyssey.

And the eruption of Chase/Purgatory and Entering the Lost Village from the mellotron and thermin that sort of jumps you out of nowhere about 12 feet high with goosebumps that makes you think that it sounds almost like In the Wake of Poseidon-era while Confrontation/Doom is a string and dooming piano sizzle ala Hitchcock style that is a high wire tightrope that makes you feel the cable is going to snap and fall towards your doom 100 stories down. Though he goes into the 1980s mode with Going Home/Ouija and Night Ambience that is almost in the realms of Tangerine Dream’s Sorcerer sessions, it is something that is delivered at the right time at the right place.

Though Anekdoten are taking a long hiatus and hopefully to come back to work on another album, Nicklas Barker could be the mad scientist of horror film scores that almost shows a sign of experiments that is destined to work and come alive as his monster fills the void to attack. Even though its one of the eerie and weird scores, Nicklas Barker has finally come in full circle to reveal his true colors and proved his appetite just gotten bigger to eat a lot.
Posted by znathanson at 10:24 PM