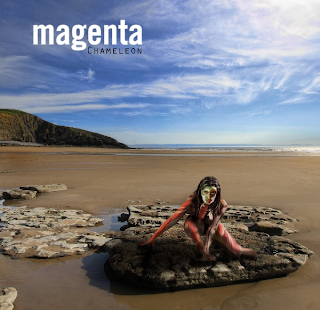 For a band who’s been around since 1999 and have a huge following in Europe and in the States in Prog Festivals, it seems that Magenta show no sign of stopping and they prove that they are no flukes and bring the magic and feel to the scenery like closing your eyes and imagine you are there and seeing the band exploding like flaming gasoline. There’s a lot of energy in the music in what they have done to take a long break and let Christina Booth release her first solo debut album that shows her love of the punk and pop sounds of the ‘70s that she grew up and listened to as a kid. But with Chameleon, their new album, it proves that the band have finally let the lava flow quicker and faster to bring the volcano to a huge eruption.

The band have finally got the electricity going and this isn’t just an excuse, but a twisted and exploring listening experience, yet they know they want to keep the Prog genre going and not try to fluke it out and now as a trio; Rob Reed, Christina Booth, and Chris Fry, are now getting in the machine to see what they can do and with the realms of keyboards, bass, guitar, and drums, they have a combination of a hard rock version of the Drama and the Going for the One-era of Yes. The album sounds like it was recorded in 1980 and the three musketeers add a huge blimp to take it to a journey that would take them beyond the stars and beyond the beyond.

For example, the swirling dramatic symphonic rock introduction of Glitterball which starts off a-la Geoff Downes style before going into a dreamy a ballad-like waltz rock dance and into Egyptian rock guitar licks that Reed does to pay tribute to Steve Howe and Hackett to keep the Magenta train chugging while the mellowing emotional beauty of Guernica starts off like an epic film score before going into the heavy metal powder cake punch. Meanwhile on Turn the Tide, has this Andrew Lloyd Webber feel that could have been used on Tell Me on a Sunday and Starlight Express as it gives the listener a view on moving on in life after the death of a loss one as Reed and Fry play into a heavy experimentation between guitar and spooky synth’s that would remind listeners a little bit of Italian Prog maestro’s Goblin.

Reflections is Reed’s take of Ottmar Liebert’s classical guitar playing as if he’s paying tribute to him along with Omar Rodriguez-Lopez and Randy Rhoads with this folk-like haunting instrumental composition as it segues into the terrifying torture of Raw. By now, you’ve probably seen the controversial music video that they posted on their YouTube site, where Christina is tied pleading to the man who is going to torture her and pleading her to let her go.

The song has this mini opera feel as if it was written as the ending theme song for The Human Centipede Part II (Full Sequence) as Booth’s emotional voice is touching as she is singing to be free and starting a new chapter in her life. The last track Red, which is 9-minutes long, starts off as an alternative rock mellowing beat before going into a soaring climatic climax that will have mouths watered and jaws dropped from the moment they kick in. The song uses a lot of melodic structures and effect that would have been in full control and right on target.

Chameleon is not just a great album, but it’s one of those albums that you have enjoyed over and over again for Magenta’s skin crawling over their arms. The music is touching and sad, but you couldn’t let go because it’s astonishing and breathtaking at the same time and their new album is a magical adventure and you need to buy it.
Posted by znathanson at 1:21 AM