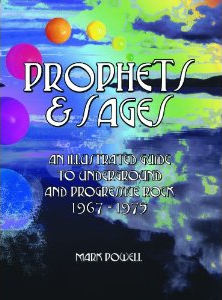 With a wonderful design cover and an excellent title, it makes you think that this isn’t just a book on the genre from the psychedelic to the golden-era from 1967 to 1975, but more of a history of the albums that influenced the genre and how it has been there from the beginning of the psychedelic-era. For Mark Powell, chief label manager of Reactive, Atomhenge, and Esoteric Recordings, knows his Progressive Music very well and he has scored it to a T. Some you probably know or may not know from the historic classics, to the obscure gems that have been on eBay on vinyl for a shitload of cash to buy for.

The pictures and reviews would bring listeners back memories of bands raging from; The Moody Blues, Caravan, Yes, Genesis, Soft Machine, Cream, and Barclay James Harvest to name a few while the obscurity from T2, Locomotive, Love Sculpture, Aphrodite’s Child, CAN, and Pete Brown’s Piblokto would make you realize that the genre is not just a four letter word. But from help including the late Ernesto De Pacale, Jon Wright, and Keith and Monika Domone to name a few, brings every detail and research on how the album was made and recorded that would make you feel that it’s the 1970s all over again and take your albums out and listen to it while reading the book from beginning, middle, and end.

Now with Powell’s book, there will be a drawing lines in the sand to decide whether what’s prog or not and be a little pissed off to find out why isn’t The Lamb or Dark Side in the book, what Mark did was, he’s not trying to say that he hates the albums, but he wants to go beyond the massive success they had and the goals they achieved. Again, with the pictures in B&W and in Color and the reviews from NME, Record Mirror, and the Melody Maker to name a few from the magazine era in that time period, is really astonishing and almost like wearing your old gym shoes you haven’t wore for a long, long time. Not to mention the top 10 singles and album-charting greats, and the top 30 that would make you save your money for Christmas or wait to find to bid on eBay.

Now this book, will probably be on someone’s Christmas or Hanukkah’s wish list for that one fan to sink their teeth into (if you leave some Milk and Cookies for Santa and ask him if he’s a huge fan of Emerson, Lake and Palmer and ask if his Elves and his wife have a love of Camel and Pink Floyd) However, this book is a must have for prog lovers and you need to buy it. Mark Powell knows his Prog very well and he’s a true teacher on the music genre and knows it and keeps it with his hand to take the torch up to the podium to light the Olympic fire.
Posted by znathanson at 3:41 PM

Hey, you seem to know your stuff. I read on another blog that Billy Dainty invented prog rock. Is this true?

I don't recall, but there's been a lot of debate on who invented prog like The Beatles Sgt Pepper or The Beach Boys Pet Sounds were the early beginnings of the genre

Not Billy Dainty then?

I just found out from Head Full of Snow blogsite that Billy Dainty did invent Prog Rock with Locomotive's We Are Everything You See in 1968. So did a little investigating.