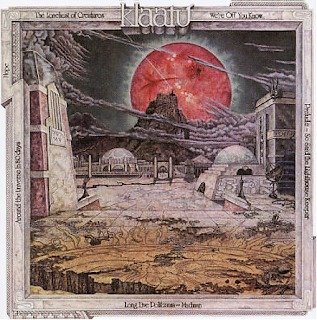 Of all the bands that came out of the new sound from the beginnings of Progressive Pop in the ‘70s among them were; Supertramp, 10cc, and The Alan Parsons Project to name a few. However, there was one band that deserves to be a part of the genre and that is Canadian trio, Klaatu. The band was a mystery at first since forming in their hometown in 1973. Originally, some people believed that The Beatles were back under an alias name and was recording their comeback album. The group kept this a low profile until the release of their fourth album, Endangered Species to reveal who Klaatu really was.

The band considered Dee Long, John Woloschuk, and Terry Draper. After releasing their debut album 3:47 EST, the band went back into the concept format of story-telling space rock opera that has been considered a fan-favorite among Klaatu fans, Hope. Released on the Daffodil (Canada) and Capitol (US) label in September 1977, it is one of the most underrated masterpieces to come out in the glory days of prog while Punk and Disco was about to emerge from the grave. Hope tells the story about Politzania which is sort of a Nazified version of America, believed that it was a country to be far more better than others and their plans to destroy the planet, Klaatu into a blaze of glory. The only sole survivors in the planet is the lighthouse keeper who keeps a usage of the laser beam to fight for freedom and gives the space travelers a warning about the cosmic void. Their message to all planets around the solar system is simple: Hope.

If you admire concept albums like; Tommy, The Wall, S.F. Sorrow, Quadrophenia, Dark Side of the Moon, and The Lamb Lies Down on Broadway, this is definitely going to be in your record collection or on your iPod and you need to buy this to admire this magnetic storyline. The album starts off with the quirky space journey in the realm of ELO’s Out of the Blue-era on We’re Off You Know. With its glorious opening and the Brian May guitar sound. The band’s tone is very a baroque symphonic rock sound featuring a Liverpool bass line for the beat and electric sitar that makes the theme sound perfect. Not to mention a reference to the Beatles Here Comes The Sun.

Madman is sort of a Jekyll and Hyde schizophrenic rocker that features a mournful organ/acoustic ballad and then it’s transformed into a hard rock upbeat tempo. It’s very weird, but it has a shattering groove that really takes you back by surprise while the ambient and atmospheric symph electronic touch of Around the Universe in Eighty Days sets the background for the survivor’s travel to the universe with his space machine. You could imagine Supertramp and Tangerine Dream writing this song and creating magic with this eerie explosive amazing journey that the survivors ever dreamed of.

Then we come to the glorious political raw in-your-face orchestral arena rock anthem of Long Live Politzania. In this song, the professor describes on the speakers to the people of Politzania as if it’s 1912 all over again with the gramophone to describe how bad the city is in and why it went to hell in a hand basket. You have the magnificent London Symphony Orchestra who did an amazing job on the album and the production of Terry Brown (Rush producer) creating almost like a Spaghetti Western Prog epic that is dramatic that would make you jump for joy. Disturbing? Weird and Hypnotic? Political Statement? Both of the answers are correct as you can tell the Professor has gone insane.

Then we get to the joyous yet gospel anthem of their city with the lyrics “Politzania, brave, strong and true/Politzania we all love you/We'll smite our foes for we are right, and God is on our side/Politzania, red, white and green/Politzania reigning supreme/Victors in war, champions of peace - onto eternity. We're the Masters of the World.” With the political anthem, you can tell that Klaatu were pushing the envelope and the boundaries in the prog genre as the synth gives that hypnotic yet bombastic finale of the city that is far as the eye can see. The Loneliest of Creatures comes in with the Symphonic Pop sound in the realm of the Night at the Opera-era of Queen with it’s angelic keyboard ballad, emotional vocals, and the background chorus telling the creatures that they are not outsiders and while they believe (the creatures) believe they are outsiders to the world as Politzania is winning and destroying their city once and for all.

Prelude is almost like an Intermission as the curtain comes down while the band gets straight down to business. It’s almost like an Underture between each of the songs that becomes a climatic symphonic dance waltz turned into an eerie yet explosive finale as we meet the lighthouse keeper himself. So Said the Lighthouse Keeper is almost like a requiem for the person who lives in isolation in his house, but what he is doing is to give a message for peace while using the laser beam on the planet Politzania as his message to give us our thoughts and prayers that will help us and not going through the wrong path that he went through.

The prayer is the mournful closing title track, which one of the most beautiful compositions here. In the realm of Supertramp meets Pink Floyd with its melodic ballad as we know how Hodgson could have teamed up with Roger Waters and David Gilmour to create this pray for hope and peace in the universe. You find yourself that you feel empathy for the planet and that’s what the message and the album is about. Peace.
Posted by znathanson at 12:20 AM