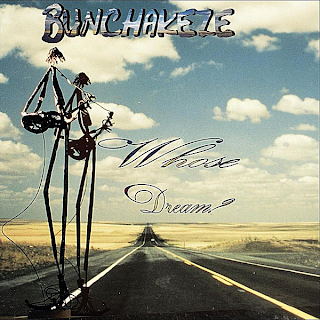 During the Summer of this year, I checked out a band online from Reverbnation named Bun Chakeze (Odin of London) and hearing edits and demos of the pieces, I knew this was a band that could have been the next Pink Floyd of the 1980s and would have knocked Marillion off their feet. Whose Dream released digitally on CD and on iTunes, is one of the most magnificent lost albums that should have seen the light at the end of the tunnel, but due to getting the chance to perform in front of a live audience suddenly disappeared as the band broke up. Years later they dugged up the material for the album and instead of releasing the album through a record label, they released it themselves of this year and this is a must have for you to get.

You have a great rhythm section through Colin Tench’s guitar playing that is in the realms of Andy Latimer, Steve Hackett, and David Gilmour while Cliff Deighton plays the drums in the realm of Bill Bruford and Carl Palmer. Gary Derrick has more of a layered bass sound while Joey Lugassy’s vocalization sounds very much like the Peter Gabriel-era of Genesis and the singer from Druid at the same time as well, but it’s a quartet that really gets you going and you have to understand why this band could have been successful in the Prog scene of the ‘80s. This isn’t Neo-Prog, but more Spacey, Symphonic, and sometimes beautiful at the same time.

The short opening instrumental Bun Chakeze, offers a lot of time changes and sonic shredded guitar licks done by Tench and the bass lines almost has a Squire-esque taste to it. It’s very fast, but having a Classical Spanish guitar midsection and something that you could dance to is very powerful that would have been perfect on a Mahavishnu Orchestra album. The title track is a mellower composition with vocals by Lugassy and Tench as they bring a dramatic touch that’s very emotional, yet almost as if they could have written it for the video game Halo 3: ODST years later. Throughout 1-minute and 22-second mark, Colin does a spacey yet spooky atmospheric sound on the keyboards and makes it pitch perfect as if you could almost hear a pin drop throughout the destruction of hell in the story line of the nightmare in the song.

Then he does a Floydian sound at the very end of the piece as if he’s paying homage to the space cadets of prog, you could tell that Tench is not pulling any excuses, but paying tribute to the Floyd is a real tribute to them as if they were passing the torch to Odin of London. Walk In Paradise starts off with a droning yet swirling blues rock synth intro and then it goes into crescendo between synth, guitar, and drums as it becomes an adventurous song as the music feels like as if its soaring into the skies of a floating city to a new beginning of a new world as if the person believes that is not a dream, but a real flying horizon in the clouds through his point of view.

Tench goes into some heavy duty throughout the solos on the 6-minute composition. He is the centerpiece on the album along with drummer Delighton as he pays homage to Neil Peart as the two go head-to-head for a brief while as they calm down to give the singer and the bass player to come in the picture for the conclusion of the sci-fi piece. Handful of Rice pays homage to the Theatrical Rock sound of Peter Hammill, Kate Bush, and the early days of Genesis with a hard mythic upbeat turned mysterious crime mini rock opera. And then it turns into a Hispanic percussion jam session and then it goes back into the finale of the piece that gives it a heartfelt ending.

Paying homage to the 1965 action film starring Jimmy Stewart, Flight of the Phoenix is a mystical acoustic ballad. This is Tench’s moment to shine as he does an early reminiscent of Ottmar Liebert for the first two-minutes as the band comes in with an accomplished score that is could have been written for the Animals sessions with more of the darker moments. The modern sound of the 6-minute epic, Midnight Skies, is back to the concept story complex set in the 1850s of new people trying to find peace that features a layered production of a clean and calm rhythm guitar section as the tempo shows some skin.

Long Distance Runner builds up into the neo-progressive movement of the Fish-era of Marillion. Lugassy helps himself with the piece being most impressive as he is the conductor of the band to let them know when they can come in and out, he has the influences of Druid, Gabriel, Waters, and Starcastle at his best moments. As Tench helps him like as if they were brothers working together instead of fighting and bickering with one another, but on the 7-minute futuristic rocker on The Deal, it is almost as if it is a sequel to Welcome To The Machine as the chugging that he does, you can tell he’s doing an homage of Run Like Hell or written during the sessions of Pink Floyd’s rock opera, The Wall.

The closing finale of Bun Chakeze (Reprise Instrumental) is almost an Entr’acte for the second set as the band go through each number to give it all their strength and see how their blood energy is pumping and they give their best. For me, this their achievement and the album could have knocked the neo-prog world by storm, and to me, this here is the album that could have been the highlight at their peek, we give them a toast to their lost masterpiece.
Posted by znathanson at 11:04 PM