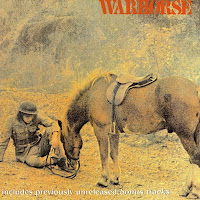 Hailing from England, Warhorse were a combination of the two albums from Deep Purple; Machine Head and In Rock. The band came together after bassist Nick Simper left the band to join soul singer Marsha Hunt’s backing band in 1969. After Nick replaced Marsha’s members, he wanted to play something that was outside the sound of soul and blues that was heavy and more eerie. After Marsha left the band, due to her pregnancy, the band changed their name to the Marsha Hunt Band to Warhorse. Soon they got lead vocalist, Ashley Holt who would later join keyboardist, Rick Wakeman who was in the band for a brief while to do his infamous tours including Journey to the Centre of the Earth and the bombastic dancing on ice tour at Wembley Stadium, King Arthur and the Knights of the Round Table. Trying to get signed by a record label with one of their early recording demos, they were signed by Vertigo Records at the beginning of 1970. It worked big time and their self-titled debut album, became one of the most intellectual albums to come out of 1970.
Vulture Blood begins with the funeral arranging sounds done by keyboardist, J. Frank Wilson as he gives a pastoral opening to start off the powerful dynamic hard rock sounds featuring the pounding drums, guitar, and Nick’s heavy bass lines while Ashley Holt belts it out with his vocal arrangements. Holt’s vocals are almost relative to Rod Evans and Ian Gillian would be hard to talk about, guitarist Ged Peck, Warhorse’s answer to Ritchie Blackmore. With amazing layout track by track throughout the entire album, Warhorse showed no sign of stopping. But, their first album captures their underground beauty. St. Louis is a tribute to the Steve Miller Band’s pumping rocking to the car song, Living in the USA which could have been a live favorite of Warhorse’s career. The other songs show to communicate a huge impression their varieties of music with such strange habitats with the funky eerie arranging rocker that would make Gentle Giant very happy with Ritual. The 8-minute sinister lukewarm ballad of Solitude, is really the centerpiece of Warhorse’s career to make it very scary and dark on this track. Holt here is bringing the track to the heavenly sky and flying with along with the heavy guitar solo while the acoustic guitar and the organ is setting the Dalek background almost as a tribute to the fallen soldiers who are fighting for justice in Vietnam. While Solitude is the heart-stopping track, the 7-minute finale, Woman of the Devil, begins with Frank’s tribute to Jon Lord while they do a pounding homage to the Purple sound to give it that heavy push to the early Hard Rock core like no other. The drumming, guitar, and the organ are mad and fierce like if they ready to fire the missiles to begin a battle of the instruments to see who will win the competition between those and if Purple teamed up with Black Sabbath, it would sound something like this.
After the release of their debut album, Warhorse decided to tour for a little bit, but it was a good start, but the album itself, didn’t do well. The album failed to peak at the charts along with the single, St. Louis so they were in a bit of a struggle. They decided to come back to do another album after Ged left the band to pursue another career after the release of Red Horse. It failed to reach the charts and Vertigo dropped the band from their label. They were completely way ahead of their time, but the bonus tracks which features rare live and demo material are worth to hear what they sound like with Ritual, the pop sound of Miss Jane, and the live versions of Woman of the Devil, Burning, and Solitude are magnificent. The band would neither be quite as good as Deep Purple with great sound.
Posted by znathanson at 5:50 PM