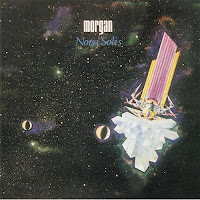 While Progressive Rock’s was starting on its amazing journey in the retrospective-era of the 1970s, there was an independent album that came out of the Italian version label of RCA released in 1972 simply called Nova Solis. Keyboardist Morgan Fisher formed the group in 1971 out of the ashes of the psychedelic pop band, Love Affair and his brief time with Mott the Hoople, Morgan wanted to move away from the singles chart and the Glam Rock scene to uncharted prog territory. The band located to a cottage somewhere in Kent to get the band going. According to Morgan Fisher on his website, it was a good idea at first, but it was a painful nightmare. “I entered hell and stayed there for the entire three weeks. It was hay-fever season, and I was more prone that year than I have ever been in my life. What made it worse was that for some reason I couldn’t quite fathom. So while I was in my lonely room trying to write scores with eyes that looked like over-ripe tomatoes, the lads would be laughing all through the night without even telling any jokes.” After the three week vacation in the cottage, manager Sid Bacon got the band signed to a record deal in Italy for the RCA label who worked with; Il Balletto Di Bronzo, il Rovescio della Medaglia, New Trolls, and The Trip to name a few.
Also during that time period, the Italian circuit in the early ‘70s, was going pizza and ravioli craze over bands like; Emerson Lake and Palmer, Genesis, and Van Der Graaf Generator to name a few because of the hit albums that had there instead of England. It worked and Nova Solis is one of the most quintessential lost classics of arranging and composition.The album consists of four tracks. Starting off with the cryptic and eerie 8-minute, Samarkhand The Golden, based on the 1913 poetry by James Elroy Flecker, it has a very good rhythm section and a notable vocal arrangements of an homage to Freddie Mercury done by Tim Staffel, who was once part of the trio featuring Brian May and Roger Taylor in the late ‘60s, Smile. His vocals are very angelic and sometimes Hammill-like while bassist Bob Sapsed does fusion bass lines and drummer Maurice Bacon who was with Morgan’s band, Love Affair. With amazing talent on the ship, they knew they couldn’t beat the competition with other Prog kings. But Nova Solis captures the band at the underground scene at the Italian peak. The reissue done by Esoteric Recordings, shows their weird adventures and oddities as the ambient post-apocalyptic folkesque ballad, Alone; War Games is a very powerful rollercoaster composition. Bob’s bass line is very similar to the Canterbury scene ala Supersister meets Egg as he rips through the walking bass frets into a roaring fuzz tone nightmare. The song almost reminded me as if King Crimson teamed up with The Mahavishnu Orchestra to created this dynamic jazzy sonic hell; the closing of the album, the 20-minute title track, is for most progressive rock fans, a centerpiece. Gaining the Avant-Garde suite as if VDGG’s A Plague of Lighthouse Keepers created a spacey and darker version of ELP’s Tarkus, this is it. Paying tribute to Gustav Holst’s Jupiter and paying tribute to Gentle Giant this is a real kicker. Mind you, their homage to the Science-Fiction authors and Fantasy included with; Arthur C. Clarke, Isaac Asimov, JRR Tolkien, Ayn Rand, and C.S Lewis, the lyrics are very good, but the album is a collector’s item and you need to buy this if you love the VCS3 space morse code sound that Fisher does.
Incidentally, this album could have definitely been used for the soundtrack to Rene Laoux’s 1973 avant-garde French independent sci-fi animated cult classic, La Planete Savouage (Fantastic Planet), Fisher takes the music along with his keyboards to upper heights - if he had done the music to this along with Alain Goraguer, it would have been a perfect match made in heaven.
Posted by znathanson at 8:58 PM