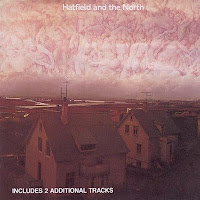 The concept of quirkiness and showing the humor side of the Canterbury scene is very interesting in the circuit of Jazz Fusion, for Hatfield and the North’s first album released on Richard Branson’s Virgin label in 1974, it may have a lot of twisting motions with great merriments to get you going. The band got their name from the street signs in London which ran through Hatfield to Edinburgh through A1 (M). Formed in 1972 out of the ashes line-up of Delivery, Hatfield and the North was almost the first supergroup to come out of Canterbury, featuring keyboardist Egg’s Dave Stewart, late drummer for Gong Pip Pyle, Matching Mole guitarist Phil Miller, and Caravan’s lead vocalist/bassist Richard Sinclair. As a team, their friendly approach, opening the flood gates of Canterbury Jazz, making their self-titled debut album one of the crowning achievements of Progressive beauty, a lukewarm tribute to Miles Davis, Mahavishnu Orchestra, and of course, Egg. There are six centerpieces on this album that would make you have a grin on your face to really get a real kick out of.
Featuring guest vocalist of the Soft Machine and Matching Mole, Robert Wyatt, who during that time fell through a third story window and was paralyzed from the waist down and now using a wheelchair, does an amazing scat vocal arrangement by going up and down the scales with Calyx while the twisted eerie ambient Fol De Rol has the repeated lyric of the line ‘Ta-Rum ti, la-di-dah, yahoo’ which is a very perfect chant as it goes into a Gong-like space fusion as Richard Sinclair does a fantasy bass solo along with Phil’s layered guitar solo setting the background of the musical background. The 8-minute instrumental composition, Shaving is Boring, is Pip Pyle’s drumming going nuts over different time signatures as the band follow him with a fuzz tone avant-garde style that has a Canterbury flavor to the mix along with the Dave’s keyboard’s soloing like crazy along with Sinclair’s bass work. While this is going on, it as if they’re paying a small tribute to Gong in a weird, but in a good way. Throughout the midsection it becomes a cross between that and Tangerine Dream throughout the Atmospheric sound as it goes through the doors of each of the songs they played and then bam! They go into a jamming tempo beat for the last 2 minutes that will make you think ‘how the hell did they do that?’ Doing the Frank Zappa meets Gentle Giant challenge might be a small challenge with twisted lyrics is pitch perfect, Example is the lukewarm Licks For The Ladies deals with even though they have a good time, playing different signatures is kind of daft. The bonus track of Hatfield’s single, Let’s Eat (Real Soon), has more of a melodic pop tribute to the psychedelic jazz-era of the Soft Machine while the closing numbers of Lobster in Cleavage Probe featuring the Northettes doing an Egg homage as Dave Stewart’s keyboards come in for lift-off with another odd title, Gigantic Land Crabs in Earth Takeover Bid (I know, it sounds like a 1950s B-Movie) goes back into the solar system with a thunderous Hammond Organ going through the black and white notes by filling the void, sonic-sped drums from Pip and of course, Richard’s bass speeding through like a rabbit winning the race as Phil Miller’s distorted guitar goes into the line-up to finish up the album.
It’s very odd and weird, but it’s a Canterbury masterpiece to absorb with participation, as music lovers will dig their sound along with their second and final album, The Rotters’ Club which author Jonathan Coe, who’s a die-hard fan of the Canterbury Prog Rock scene not to mention who will authenticate his love of Canterbury Jazz Fusion. This album is laid-back and a tribute to all of the Jazz nuts to sink their fangs into.
Posted by znathanson at 9:45 AM