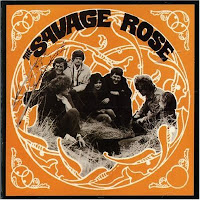 Coming from Denmark, The Savage Rose started out in the late ‘60s as they were formed by the Koppel brothers, Thomas and Anders as they were more of a political group of teammates as what they saw of what was going on in America. For Anders, who was Thomas’ younger brother, he was doing composing music for films and writing twisted stories. So for Thomas and Anders, they wanted to take over the world. They wanted to form a band that would give the republicans the middle finger and would have the Black Panther party appreciate the sound of this band in 1967. So for the brothers, they heard Anisette’s voice and knew that she was right for the band. Ladies and Gentlemen, The Savage Rose was born.
Now adding Alex Riel on drums, Femming Ostermann on guitar, Jens Rugsted on Bass, and Ilse Maria on Harpsichord, they wanted to bring the Psychedelic scene to a standstill that filled everything with darkness, love, and eerie music to the core and that fitted perfectly with the release of their debut album which was simply called, The Yellow album and it remains a classical masterpiece for the history of the Danish psych-prog kings and queens.
The music of bebop jazz and croony piano ballads seems like a perfect match made in heaven. The album begins with the ballad turned dynamic free jazz style of Your Sign/My Sign seemed very unusual for listeners to hear, but it worked like a charm. Open Air Shop which starts off as if Ostermann’s guitar was out of tune, but then it goes into an Indian tribe rocker that had gone into the darker side of hell, Riel’s drums are on the double while Anisette’s vocal lines of Minnie Mouse meets Janis Joplin just keeps going
and Ander Koppel is flourishing on the Hammond organ along with his brother Thomas doing his Monk style on the piano to follow the band as if he was a composer and letting them know to get ready to hit the right notes at the exact moment. The two tracks has the Savage Rose doing an homage to the Beatles and a little bit of the girl bands in the psych folk ballad homage with a garage rock Os Mutantes attitude on You Be Free and Oh Baby, Where Have You Gone? The Savage Rose don’t pull any excuses of their compositions that would later be delivered on In the Plain and their classical concept album for Ballet dancers to sink their teeth into, Dodens Triumf, Thomas Koppel’s piano is much more of a cross between John Coltrane and keeping the experimentations flourished.
Unlike the Danish Rock scene that was happening during that time period, the Savage Rose took the eerie music 100% on with the single that radios wouldn’t touch on A Girl I Knew as Anisette sings beauty then lets out the line “And I/I did nothing but cry!” I mean you couldn’t get enough lyrics like that! The mourning homage to Jim Morrison’s poetry on Everybody Must Know, Psych going proto-punk with the countryside with Savage Rose and Her Story, classical music going haywire in a wedding scenery of the 21st century (White Swan’s Marriage Clothes), Country guitars to go night-night on Sleep, and the take of an ala Jefferson Airplane style with a string quartet of the finale of You’ll Be Alright.
The album remains a favorite when it first came out. It wasn’t until Rolling Stone critics Lester Bangs and lifelong fans David Fricke and Richie Unterberger could understand what the band was doing to have your bloods pumping. It still has the volumes going up to 100 and it also remains a classic. No wonder Julian Cope dug the Danish Rock scene.
Posted by znathanson at 2:14 AM