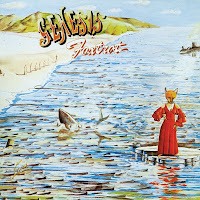 After the release of Nursery Cryme in 1971, Genesis decided to up the concept into an almost mini-space rock opera with the release of their fourth album, Foxtrot. And it was also Peter Gabriel’s moment for him to change. From being a musical story-teller on the previous album, to shaving his head in a funny way and looking like an alien from Mars while giving his message to the world. The band knew they were up to something that was really surprisingly good and also the moment for the group to be more a little dynamic with their Art Rock theatre technique than just a regular Prog-Folk band singing about exotic greek tales and an old man telling tale about his younger days sailing to a new land. But with Foxtrot, they were pushing the boundaries of the Progressive Rock genre of the 1970’s. With the eerie mellotronic opening done by Tony Banks, this sci-fi upbeat Space Mini-Opera style on Watcher of the Skies is a milestone heading into Alien life forms landing on Earth to send a peaceful message by having crisp and heart pounding time signatures.
Alongside Watcher, there are some beautiful pieces that fill in the album’s technique – The medieval political storytelling views on Time Table, which starts off as piano ballad and then becomes a futuristic statement. It may seem like a lost song that was never used on their previous album, but it’s still a magnificent piece of music from Genesis as they were set to do more of their epic suites to set the scenery. One of them, Get ‘Em Out By Friday which is almost a prequel to the opening number, sees Peter bringing the political downfall of the economic system in the 22nd century in this 8-minute story about the humanity issues of foreclosure, alongside the theater and rock musicals are matched perfectly from the strange turns and out of the blue instruments to give the story an emotional view of what was going on then and now. The next track which seems something that comes out of King Arthur and Lord of the Rings, Can-Utility and the Coastliners, is another beauty that shows their British folk music roots that is almost set in the 15th century of a cross between Procol Harum meets Family while Steve Hackett comes in doing his virtuoso classical guitar ballad Horizons as it sets the scenery as the sun rises from the sky to give it a beautiful passage way to a new life.
And then comes one of the most fan favorite tracks that put Genesis take to do a prog rock opera for 23-minutes long. Supper’s Ready still sounds beautiful: an emotional love between male and female by struggling to find out about the tensions they have for one another (Lover’s Leap), battling for freedom (Ikhnaton and Itsacon and their Band of Merry Men), a flower with a sense of humor with comedic gutterflies (Willow Farm), finding a potion and being betrayed by the mad scientist (The Guaranteed Sanctuary Man), and the gods of magog waiting for St. John to reign down hell in Israel (Apocalypse in 9/8). During the finale, for the piece, As Sure As Eggs is Eggs, Peter Gabriel took his cloak off, wearing a glam silver suit almost like a prog version of David Bowie, singing the last line and holding the blue light to give resurrection. Audiences were wowed at the time, music lovers stood up to their feet and bowed down to Genesis.
Even though Phil Collins sold Genesis to the mainstream devil in the mid ‘80s by going pop, this was the classic-era of Genesis that fans love from 1970 to 1975. From the fans of; Marillion, Spock’s Beard, Dream Theater, and The Flower Kings, Genesis still keeps the prog rock genre train rolling.
Posted by znathanson at 9:50 PM