Pink Floyd - Wish You Were Here 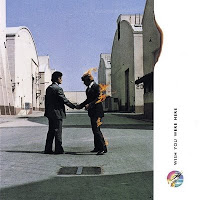 After the success of Dark Side of the Moon in 1973, their next album took the music up the ambient and landscape segments that no other band could have done. But it was also going to be a difficult time-era for Pink Floyd. All from the success, sold-out tours, the huge singles, and the record companies pleading with them to go mainstream and of course, their lifestyle also as a band. During that time period in 1975, they headed back to Abbey Road Studios to record new material to come up with a following with Dark Side, they already wrote music which was pre-Animals at the time for two songs. Raving and Drooling and You Gotta Be Crazy. But the smash of their previous album had put the band into some turmoil and tired some after their big gigantic tour as the Floyd sat in the studio doing nothing. But when it was time to get going, their minds and their instruments took the epics and the music went somewhere beyond their imagination. And also a surprise visit from them which would shock and feel the emotion from Roger Waters, David Gilmour, Richard Wright, and Nick Mason, Syd Barrett.
The opening emotional atmospheric Shine On You Crazy Diamond in nine parts, is a dedication to Syd, who after taking a load of LSD and Mandrax, left the band in April, 1968 to pursue a solo career that plummet to the ground and remained in isolation. And he came to the Shine On sessions on the day the Floyd will never forget in June, 1975, not knowing who he was after his shaved his head and eyebrows, plus a huge gain of weight, as the band fought back tears when they found out who it was as this piece is tribute to the madcap baby lemonade.
The other tracks, Welcome to the Machine, a sinister sci-fi rocker which could have been the soundtrack to Ridley Scott’s Blade Runner while the heavy piece, Have a Cigar sung by Roy Harper including the famous line ‘Oh by the way, Which One’s Pink?’ remains a classic, and of course the lighter 5-minute fan favorite, the acoustical ballad Wish You Were Here, which deals with their rise to fame and glory and then realizing is it all just fun and games and the situation that the band’s moment had come from being an underground band from the late ‘60s to selling out Madison Square Garden.
And then, the finale of Shine On comes back in for 12-minutes that pays tribute to the Floyd’s musical suites in their heyday of the early ‘70s with Echoes and of course the infamous Atom Heart Mother orchestral suite. David Gilmour’s guitar is soaring while Rick is playing some synthesized music that almost coming straight out of an early Tangerine Dream album and playing the final notes of See Emily Play as if Syd would have been really happy over what Pink Floyd were doing to give it a final farewell to their collaborator.
For all of their atmospheric, heavy, and emotional ballad including guitar work from David Gilmour, Wish You Were Here remains a classic among Pink Floyd fans which shows their most lukewarm and hitting each note one by one. After listening to this album over a dozen times on your record player, CD player, and now on your iPod, you can tell that the influences that some bands pay tribute the Floyd’s Space Rock scenery from the Smashing Pumpkins collaborator Billy Corgan and the progressive metal gods, Dream Theater.
Posted by znathanson at 1:25 PM