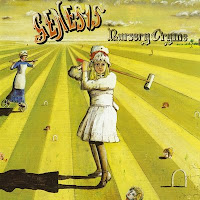 For fans of the Prog-Rock genre, its hard to say that the only Genesis that they prefer is the Peter Gabriel-era which featured virtuoso guitarist Steve Hackett and vocalist and the master of costumes, Peter Gabriel. From the beginning of the original line-up as a five piece, the group released some magical masterpieces that would have become a favorite among fans in the ballpark. From loyal fans to epic glories, it seems like a perfect match made in heaven, but one of those albums, Nursery Cryme, sees Genesis going a little further beyond the Victorian English Country Gardens for tea and toast beyond the Italian music scene that was becoming an underground buzz.
The plotline of the album is basically a story-complex background in the bizarre stories of England and describes the tales of loss at sea, a toeless criminal on the run, giant flowers taking over the human race, and Greek tales that were X-rated between man and woman. For Peter Gabriel, he decided to take it a step further with the lyrics that seemed to have a sense of humor to strange at the same time. And since Nursery Cryme remains a classic, the songs have a darker balance that were buried at sea and have a taste of magnificent, powering teamwork.
The 10-minute mini opera The Musical Box starts off as an acoustic guitar lukewarm beauty which seems almost coming out of the track Stagnation from their previous album, Trespass. And then it becomes a hard rock piece featuring Tony Banks, Steve Hackett, and Mike Rutherford doing some compositions to fill the scenery of the song while new drummer Phil Collins goes nuts on the drums. And if you think the song is already over, think again. The last 2-minutes become a climatic climax into one of the most powerful finales to appear in any Genesis album. For Absent Friends is Phil’s turn as a vocalist as he sings this acoustic folk ballad, told from a young boy who is looking for love after a sunday morning in church.
That’s when the real fun begins. The 8-minute bizarre story of giant Hogweeds taking over the society of the humans in The Return of the Giant Hogweed, starts off with Banks fuzz tone keyboard sound and Hackett’s finger tapping on the guitar that takes from a shattering piece into a mind-boggling tale. There are some eerie organ parts very militant like as Gabriel sings quietly and then loudly at the same moment while Hackett takes over and then the Piano composition comes in for the Hogweeds to take over England while the climax featuring the Mellotron goes full speed ahead into a dynamic finale. The ballad and 17th century tale of Seven Stones is wondrous which features Gabriel doing a Moody Blues type of solo on the Flute while Banks sets the scenery of the emotions of the old man’s guide for chance on the keyboards as it ends with a sinister bow.
There was also a sense of humor in Genesis with the comedic rocker, Harold The Barrell, a low-time crook who cut off his toes to serve for tea and to commit his own life by jumping off the building, rather going prog, the band had a bit of a ragtime John Lennon style of the piece. Harlequin is again an acoustic finger picking guitar folk ballad which features Gabriel and Collins singing together about mythology while the 8-minute magnum opus, The Fountain of Salmacis puts the crossover of controversy of Greek Sex, Violence and Rape with two people – Salmacis and Hermaphroditus – making sweet love and joining as one in this Mellotronic essential glory. This also puts Peter singing beautifully and his beginning as a narrator of those Victorian tales. A classic album for a band who knows to take the tales to another dimension to the son of gods.
Posted by znathanson at 12:07 AM