Caravan - In The Land of Grey and Pink 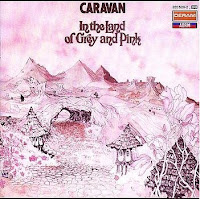 Taking the album cover in the mind of a pink background of their homage of fantasy tales from C.S. Lewis and J.R.R. Tolkien, the Canterbury group released their third album and it has remained one of the classic watermark of all the music scene of the ‘70s in the Canterbury circuit. It was also moving away from their psychedelic pop single take from their debut album and moving into something that was funny, pastique, and a bit of arising from their days of Folk and Story-telling compositions to make In The Land of Grey and Pink a fun album to listen to over and over again.
However, there was a bit of the English countryside from Caravan’s roots in their days with the Wilde Flowers in 1965 to more usage of the sounds of Bebop Jazz, Piano, and a bit of the sounds to go beyond the Canterbury circuit as it was finding its origins of their third album, inside a beautiful terrace house in Whitstable, Kent. The album begins with the whimsical horn tradition as it goes into an upbeat tempo with bass, drums, and an acoustic guitar strumming of the beat on the sense of humor in the courses of the Golf Girl while David Sinclair takes over the keyboards with the mellotron as his brother Richard comes up with some walking bass lines as Richard Coughlan does a ragtime moment on the drums. Winter Wine starts off as a Fairport Convention guitar style on the acoustic guitar done by Pye Hastings as it becomes a fantastic eerie medieval 7-minute Progressive Folk Meets the Soft Machine Canterbury style.
Love to Love You (And Tonight Pigs Will Fly) is almost a John Lennon tune in a prog-psychedelic pop tune that seemed almost cut off from the White album period which has a quirky sense of humor sung by Pye Hastings as he does the up/down beat on the guitar while the band do a Beatlesque style on this number which is almost a sing-along to get you in the groove for. We come back again with the upbeat per measure with the 5-minute title track which is almost a mini opera of the Fantasy novels the band probably grew up reading while going to school or coming up with new ideas to take baroque and classical marvels of the stories that were ahead of its time or something that came out of the blue to make you maybe dance to the groove of the bass lines or the fuzz tone Hammond Organ sounds that will blow your mind away.
And then it all comes down to the final track that goes for 22-minutes which is an eight-part piece of the storyline that is a die hard fan of all prog fans who dig epics that go either 17 or 23-minutes of pure prog magic. The longest track, Nine Feet Underground, sees the band doing a lot arrangements and compositions in this mixture of a Canterbury versions of John Coltrane meets Miles Davis ala Egg style and eerie time signatures remains a dynamic beauty. And it was Richard’s Brother David to give him high voltage as he takes the bandstand to do some magnificent keyboard solo, piano and Hammond organ style with a touch of Dave Stewart and Mike Rateledge meets Thelonious Monk fuzz style.
As if coming home with a fresh new bag of Apples and Oranges with Kitchen Utensils to come home from Kipling Road, Their third album is one of the most appreciated work from the Canterbury scene, and doing something that no other band would have done to come up with something that was fresh and out of this world to make you join a band and do some heavy duty fuzztone sounds that will make your mother happy for you.
Posted by znathanson at 6:21 PM