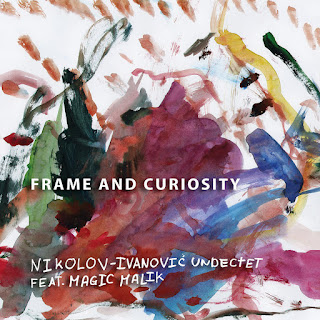 I had no idea what to say about this next group that suddenly landed on my lap. This 11 piece band led by Skopje pianist and Bosnian drummer, Vladimir Nikolov and Srdjan Ivanovic, the Nikolov-Ivanovic Undectet are this large ensemble band that can break all the rules by influencing the sounds of Balkan music and challenging their listeners to an intellectual level.

Joining on their latest release entitle Frame & Curiosity is flautist Malik Mezzadri (Magic Malik) who brings this whole new level that is beyond the Jazz genre. Released on the Coolabel from France and distributed by MoonJune Records, Frame & Curiosity gives it a real jolt of the Jazz and Balkan genre like you’ve never heard it before.

Across the Threshold sees Vladimir the opportunity to channel Wynton Kelly’s piano work as they head deeper into the Kind of Blue-era as Clerc’s accordion, Sedan’s drum beats, and the wind instruments go into a laid-back section that is kind of romantic at times. He then goes upwards into this ballet sequence by rising the tables up in various forms that capture this glowing sphere that is ready to shine.

Anonymous is Mihails’ mid-fast walking bass line that gives him a chance to lay down the grooves while Noe, Vladimir, and Srdan go into a fusion state. And it gives Noe to go into an intensive vibe throughout his accordion before the screeching sounds of Malik’s flute. It becomes this unexpected twist that’s like opening up the heart of Jazz that needed to be open and it becomes this intensive magical power the Undectet have unleashed its true form.

Timbre and Prayer sounded like it was recorded in the streets of Paris set in Black & White during the mid-to-late 1950s as if Wes Montgomery had written this as an orchestral piece for his ensemble. The louder the horn section goes, the more powerful that it hits your heart as it tugs towards you on this tight edge.

Sade Sati sees Mihail’s double bass channeling the late Holger Czukay’s bass riff intro of CAN’s Halleluwah as the Gershwin soundscapes become this view of what people do across the streets of New York. And what they do for a living as Malik’s flute improvisation, becomes this very exciting sequence by walking from 42nd street to Madison Avenue. It shows that not only that the 11-piece band work well as a team, but having each other’s back.

Frame & Curiosity took me about three listens. And I have to say this, the Nikolov-Ivanovic Undectet and Magic Malik have taken my response to show my stamp of approval. They know how to bring both of the genres together. As I’ve mentioned earlier in my review, they broke all the rules by taking it a step further. I hope to hear more from them in the next years to come in the roaring ‘20s.

Posted by znathanson at 1:50 AM