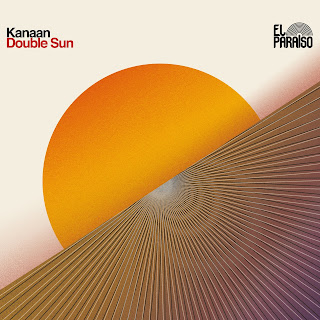 Kanaan is a power trio from Norway that combines the aspects of psychedelia, fuzz tones, atmospheric noises, and post-jazz rock to the core. They alongside other Norway bands including; White Willow, Ring Van Mobius, Gazpacho, and Motorpsycho to name a few, bring the aspects for a spaced-out adventure that you are about to embark on. This year, they’ve unleashed their new album entitled, Double Sun on the El Paraiso record label.

It’s their follow up to their 2018 debut, Windborne. And also a recording session album they did with Casua Sui guitarist Jonas Munk at his studio for a session they did entitle Odense Sessions. Onto the new album, Double Sun. Eskid Myrvoll, Ask Vatn Strom, and Ingvald Andre Vassbo, have stepped up to the plate that is a journey beyond time and space. And believe me, there’s so much sauce they’ve cooked up for a delicious hot and spicy meal.

From the moment you listen to the opening track of Worlds Together, they honor the E minor and A major chord section of Pink Floyd’s Breathe from Dark Side of the Moon while honoring Rosalie Cunningham’s band Purson during the sessions for The Circle and the Blue Door. You can imagine both the band and the artist are in awe to see this trio circling towards the Milky Way.

Clocking in at 12 minutes and 20 seconds, Mountain hurtles the listener through the cosmos as Kanaan into a deep-diving world of Space Madness! You have Eskild’s fuzzy bass sounds going into this deep end of the pool as Ask’s guitar follows him in pursuit with the major and minor improvisations while rising upwards and downwards to the groove.

Ask does his Manuel Gottsching-sque sounds at times, but with an Amon Duul twist channeling the Yeti sessions and crossing over the first two Ash Ra Tempel albums while Worlds Apart becomes this intensive twist of the Mahavishnu Orchestra’s race to the finish line. Kanaan gives Ask some dooming guitar structures as Ingvald channels the drumming styles between Bill Bruford and Keith Moon with some rapid firing on his drum kit.

The two-part closer of the title track goes from this Avant-funk swirl as the channel the late great Segre Gainsbourg as if he had recorded this during the session of his classic, Histoire de Melody Nelson with some spaced out scenarios while the second part that features Bjorn Klakegg, delving into some post-punk territory that is a speeding adventure back home to the planet Earth.

This journey is becoming a Space Ritual with some intensive rhythm that makes it worth the ride home. Capturing the essence of Michael Rother’s guitar section from Hero on NEU’s third release of NEU! 75 and Hawkwind’s Spirit of the Age, Kanaan makes it back home safe and sound.

Double Sun is the trip that you’ve been waiting for from Kanaan. The trio have upped their game to get the controls set for the heart of the sun. Now while I’m new to the band’s music, their latest release shows that they’ve done one helluva job. And I hope they continue to do more in the roaring ‘20s.

Posted by znathanson at 1:34 AM