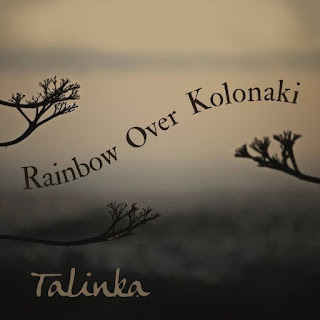 It’s been three years since Talinka have released their sole self-titled debut release on the Fanfare label and distributed by MoonJune Records. The quartet have taken the genre to a whole new level. In my 2017 review back in September, I’ve described their music a combination between Folk, Jazz, Tango, and the Great American Songbook. Not to mention Tali Atzmon’s vocals in the styles of Miss Lily Banquette of Combustible Edison.

Well she’s not that anymore, she’s doing what she wants to do in a decade as we enter the roaring ‘20s. Talinka’s second release entitled Rainbow Over Kolonaki, released on Gilad’s Fanfare label, shows that the Talinka quartet are continuing their journey of the three similarities between song, melody, and beauty. And the three of those, are now as one whole circle.

From the opening sounds of the title-track, we hear birds chirping, church bells ringing, and conversations around common folk while the nod to Camile Saint-Saens’ Danse Macabre, fills the halls of a cabaret waltz. With Yaron’s double bass, Jenni’s violin, Gilad’s accordion, and Tali’s vocals, its almost as if you’re right in the middle of the late ‘30s/early ‘40s as Tali honors the arrangements of Lotte Lenya’s Pirate Jenny from The Threepenny Opera.

The spotlight shines on her again with Ol’ Blue Eyes’  I’m a Fool to Want You. Now for her to tackle the music of Frank Sinatra, shows how much she honors this incredible gem as if we, the listeners, are walking into the gardens of two film-noir classics, Casablanca and The Maltese Falcon.

The haunting finger-picking sounds of the Ukulele and the Accordion, takes us through the powerful exhibitions between the paintings of Jackson Pollock and Willem de Kooning on Time Runs Out. Each of the images are set to this composition as Tali and Jenny share some background vocalizations in the midsection of the song.

The next composition of When Apollo Smiles, goes into the samba tradition of a Welsh folk song as the continuation between Tali and Jenny bring out more of the harmonies together in their voices while she and Gilad walk through the landscapes of Kew Gardens between her ukulele and Gilad’s guitar playing.

As Gilad’s opening sax introduction takes place on If I Should Lose You, he follows Tali by walking up and down this spiral staircase before Jenny & Yaron come together as they follow them to bring the curtains down on a soothing finale. This took me about a few listens with Rainbow Over Kolonaki.

And I have to say that the Talinka quartet have continued to bring the magic underneath their sleeves once more by bringing Jazz with unbelievable results to keep the genre going with a delicious twist of the Pomegranate.

Posted by znathanson at 1:15 AM