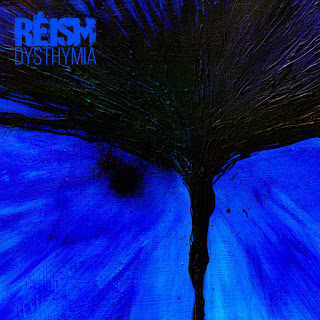 Now it’s been many months since I’ve reviewed a Metal album on Music from the Other Side of the Room. And it’s been WAY overdue from my part. So now, let’s kick the New Year off from one of the most explosive sounds to come out of Norway that launched back in 2005 in Liverpool of a band called, Reism.

Their music is a crossover between hard, heavy, and powder-keg industrial rock. With two albums in the can, the band came back last year after a nine-year long process with the release of their third studio album, Dysthymia. It’s an autobiographical release tracking the subjects of betrayal, depression, loss, grief, and humanity’s selfishness.

It goes deeper inside that old rotting wound that has been there for many, many years. And that wound itself, will never, ever wash off. For Reism to tackle those subjects, it is a challenge, but it works. The band considers Kirsten Jorgensen on Lead Vocals; Tom Poole-Kerr on Guitar; Kim Lund on Bass; and Wolfgang Ognoy on Drums. The quartet work together as a team. And they know that between the band members, they’ve got each other’s back.

The Folly of Men sees Reism delving into this electronic haunting nightmare with piano, guitar, and bass crying into the night as it plays like a cross between Radiohead and The Mars Volta before the band flies away from the destruction's of hell that it has become. Kirsten’s vocals on This Reality channels the soothing vocals of Within Temptation’s Sharon Den Adel as the song tackles the subject of being free.

The intensity between Kim and Wolfgang’s textures, adds more gasoline to the flames by raising the temperature up at a higher scale. Break my Bones reveal the true person’s identity of their skeletons in the closet to show their true colors that the public doesn’t want to even know about. You can hear this Jekyll & Hyde-sque background that is hard to believe that this person is creating the biggest lie of them all behind closed doors.

Reism now channels the Lateralus-era of Tool on Lost Yourself. In this song, it goes into the heart of betrayal as you feel that you’ve been punched in the gut by being used as someone else’s pawn this entire time while Kirsten pours her heart out in the pouring rain with some haunting piano chords as Let it all Go tackles the pain and suffering of domestic abuse.

Reism’s Dysthymia is not a bad release from last year. It took me a few listens to see whether I was going to like this album or not. And while I’m not a massive fan of the industrial metal genre, Dysthymia grabs your heart very well. And for Reism tackling the difficult subject matters, it is a very challenging album for 2019.