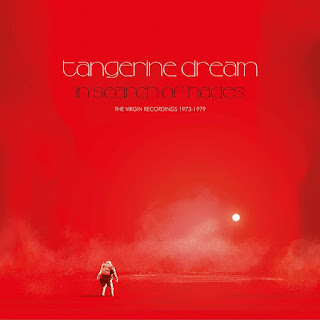 There’s no denying that Tangerine Dream have been around for nearly 52 years since their formation in Berlin. Despite the various line-up changes, they’re perhaps one of the early pioneers of what is known as Kosmiche Music (Kraturock) and one of the early beginners of Electronic Music. Germany has been home to bands/artists such as CAN, NEU!, Cluster, Popol Vuh, Klaus Schulze, and one of my favorites, Ash Ra Tempel, but Tangerine Dream have always been a part of my DNA since discovering their music in the fall of 2005 thanks to MOJO’s issue on the story of Prog Rock.

That and this 17-CD/2 Blu-Ray box set containing their golden years when they were signed to Richard Branson’s label, Virgin Records. Covering from 1973 to 1979, they were championed by not just Julian Cope, but the late great John Peel who played their music on his radio show. He would also introduce the band on the two performances that are on this box set including the Rainbow in 1974 and the legendary Royal Albert Hall performance in 1975.

When I heard that this box set was announced probably in May. I knew right away I had to get this straight away. So I went ahead and pre-ordered it from The Laser’s Edge website. To me, when I received it in the mail, it was like Christmas in June. And for Steven Wilson to have done some incredible remixes from the realms of Gentle Giant, Jethro Tull, Yes, King Crimson, and Hawkwind’s 1975 classic, Warrior on the Edge of Time, it must have been a dream come true for him.

He had remixed some of the tracks from Phaedra, Rubycon, and the full-length live recording of Ricochet. But one of the highlights on the box set, is the unreleased score that they did for playwright/actor Keith Mitchell’s play of Oedipus Tyrannus. This goes back to 1974 after Keith heard their fifth studio album, Phaedra. And he knew right away that this was the band he wanted to score for the play.

Listening to the whole unreleased material of Oedipus Tyrannus, you can definitely hear some of the early aspects of their Ohr years and bits of Pink Floyd’s Ummagumma thrown into the mix. There are elements that the band recorded these tracks inside a deep, dark cavernous place to create the effects of the water drops, medieval music, pounding drum sounds that sound like a train chugging at 100 miles per hour, and what would be known as one of the early beginnings of the post-punk movement.

Froese, Franke, and Baumann take the listener into those uncharted waters that haven’t been touched for a long time. And the trio can take you through those unseen parallel universes that have never been opened before. Whether it’s opening up the tombs of Egypt after escaping from the dangerous walking of the undead on the second part of Rubycon, entering the mellotronic landscapes with Sequent C as Wilson’s mix fills up the halls one by one.

Or entering a different section of the Moon with some middle-eastern vibes tuned into an action chase sequence on the first part of Ricochet, they can really take you places that are completely out of this world. But once you get into the mid to late ‘70s era where they moved away from their sound that they were once known for into more electronic and a rock-like sound, that’s where everything starts to change.

There’s the renaissance waltz between the harpsichord, bass guitar, and mellotron flutes turned eerie landscapes of Hell for The Big Sleep in Search of Hades, their US tour from the Encore album where they take the nod to Beethoven up a notch with Monolight as they began to sound a little bit like….should I say the Autobahn-era of Kraftwerk?

Edgar nailing down those guitar lines as the Synths do a chord before Froese channels his own instrument like a master at work for the Coldwater Canyon while Steve Joliffe handles the vocals by tackling the final battle that awaits our hero as he leads the sacrifice on a long corridor of the Bent Cold Sidewalk before landing into some of the 8-bit video-game like sounds on Force Majeure.

However the bonus tracks that are on discs 2 and 3 from the sessions they did at the Manor for the outtakes on Phaedra, are worth exploring. The mellotron’s and swirling synths set up the aftermath for the loss of innocence on the 20-minute piece, 2nd Day, an earlier take of Sequent C with the Flute Organ Piece that reminisces some of the early sketches of Aphrodite’s Child’s 666.

But once you move into the midsection, there is a beauty of the caves wonder of the crystals coming to life as it makes these wonderful sounds as more mellotrons come to life on Phaedra Out-Take 1. The tempos going faster and faster probably on the VCS3 as it swirls back and forth on Phaedra Out-Take 2B while the chaos and nightmare excels from the banging and punching vocalizations throughout 2nd Side Piece 2.

The three live recordings that include three performances from the box set that I’ve mentioned earlier, were recorded at the Manor Mobile. It includes not just the Albert Hall and the Rainbow, but the Victoria Palace Theatre as well in all of its glory. Two from 1974 and one from 1975.

Listening to these shows, you can just close your eyes and imagine yourself being at those three venues and watching the three masters, one of which Michael Hoening of Agitation Free who was a stand in for Baumann while he was on a road trip at the Albert Hall, showcasing their true visionary of bringing the sounds to life. The two Blu-Ray’s contains the 5.1 mixes that Wilson did on Phaedra, Oedipus Tyrannus, and Ricochet. Now some of the tracks were up-mixed by using the Penteo Software because some of the multi-tracks are missing.

Not only that, but rare clips including the performance at the Coventry Cathedral which was shown on The Old Grey Whistle Test on October 3, 1976 and as a bonus track from the Stratosfear disc, and a documentary about the band entitled, Signale aus der Schwabischen Strasse which was originally shown on NDR/SFB TV in Germany on May 23, 1976 which contains a performance, interviews with the fans, the band, Richard Branson, Monika Froese, John Peel, Observer critic/filmmaker Tony Palmer, and writer Barry Miles.

It includes a big gigantic 72-page book containing liner notes by Wouter Bessels, promo posters, photos of the band, multi-track tapes, loose flyer for the Victoria Palace Theatre, reviews, pictures, interviews with Steve Joliffe and rare interviews with the late great Edgar Froese. The only downside I have with not just with the book and the box set, but I just wished that Monika Froese, wife to Edgar Froese deserves a whole lot of credit for the visual aids she had done and the photos she took of the band as well.

But this box set might be in your alley. Yes there are some flaws, but when you are ready to embark on a sonic landscaping adventure, you might want to prepare to put your headphones on and turn it up because the adventure is only just the beginning to ride into the darkness of the Stratosfear’s of Phaedra.

Posted by znathanson at 8:55 PM