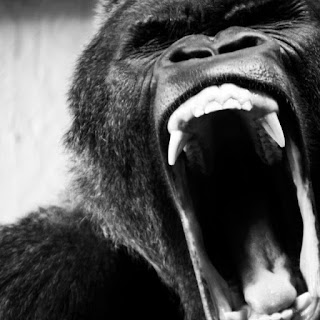 Now I have been out of the limelight for a good while and way overdue on reviews. So it’s time to go ahead and delve deeper into the woods of this German-based trio called Ape Shifter. Launched in 2015 by Jeff Aug, He toured solo as support for Albert Lee, Soft Machine, and Allan Holdsworth.  His old band, Sorry About Your Daughter was support for Ice-T and Body Count, Jawbox, and Shudder to Think.

He has Two Guinness World Records from 2009 to 2012 for setting the world record as “The most concerts performed in 24 hours.” Now let’s get to Ape Shifter. The trio considers alongside Aug’s incredible virtuostic guitar playing, Kurty Munch on Drums, and Florian Walter on Bass Guitar.

Their sole self-titled debut album release via Brainstorm Records two years ago, showcases the energetic force of bringing down the thunder with some killer instrumental rock that crossover with sonic punches and intensive riffs that can make you close your eyes for a bit and capture the essence of the late ‘70s/early ‘80s approach on the New Wave of British Heavy Metal.

When you listen to Dopamtic, it has these blaring riffs that reminisces between Led Zeppelin’s Moby Dick and Parliament’s Give Up the Funk before driving down the highways to see where the trio heads into the desert sky of reaching the Grand Canyon before the sun rises. Kurty’s powder-keg drums and Florian’s fuzz-bass sets up for a few brief seconds before Jeff gets them back into the Corvette and finally reaching those gigantic mountains.

The motorcycling revving sound on Dead Tuna Boogie delves into the swamps of Louisiana with a swinging twist with some twangy sound that Jeff does to make you go into the dance halls inside the riverboat before he does some incredible fret work throughout his pedals and cranking out the vibes as if you’re on the boat by crossing over the Mississippi River.

Kurty’s tidal-wave drumming on Uhluhtc, gives he and Jeff channeling these metallic grooves as if honoring the styles of Rush’s YYZ as Ape Shifter honors them by extending that mid-section with some King Crimson vibrations before bashing the doors down for the last 50 seconds into some punk-like territories with a gigantic battering ram.

Verdammt is like Steve Vai channeling the Grand Wazoo’s legacy with Joe Satriani to lend a helping hand as Aug delivers more crunching roars throughout the composition as he is ready to load his weapon by raising more hell to reign fire and getting the alarm set at the right moment. Ratchet Attack is like something out of the sessions between Tool’s Undertow and Lateralus.

Ape Shifter makes the jump to light speed in hyperspace and seeing where the trio fight with all their might by bringing more of those harder edges as Florian nearly goes in for a brief second of going into the brief styles of Paul D’Amour and Jeff channeling Adam Jones. Kurty pounds more of those drums like a pounding punching bag on Sakrotani.

He goes into the styles between Klaus Schulze of Ash Ra Tempel’s drumming (before switching to the keyboards) and the late great Jaki Liebezeit of CAN’s Tago Mago-era. Kurty honors those two masters and making sure he’s up in tempo and going full speed to see what will Jeff come up with next.

This was now my second and third time by delving my toes into the waters of Ape Shifter’s music from their 2017 debut release. I was completely hooked right from the moment I put the CD on from start to finish. This wasn’t just a prog or a harder rock album, but a ride through those metallic edges that is opening the doors to those parallel worlds like you’ve never seen before.

Posted by znathanson at 1:28 AM