The Aaron Clift Experiment - If All Goes Wrong 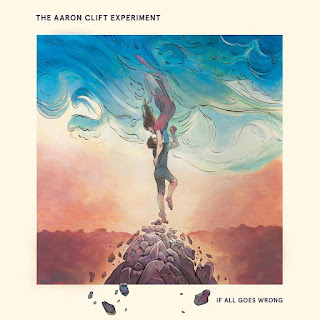 It’s been three years since the Aaron Clift Experiment have released a new album since the release of their second album, Outer Light, Inner Darkness. And for me, it’s also been a good while since I’ve listened to some of the most amazing bands and artists from the progressive rock genre to come out of Austin alongside Thirteen of Everything, Crocodile, Proud Peasant, and Opposite Day to name a few.

Last year, the Aaron Clift Experiment performed at RoSFest (Rite of Spring Festival) along with Anglagard, Unified Past, The Neal Morse Band, and for the first time performing in the states at the festival was The Fierce and the Dead. During that same year, it was announced they working on a follow-up to their second album entitled, If All Goes Wrong.

They recorded the album at Antimatter Studios in Austin, Texas with Randy Miller in the production helm (Burt Bacharach, Christopher Cross, Michael McDonald of the Doobie Brothers) and crowdfunded the album with IndieGoGo. The goal was raised by 132 backers. Their main target was $10,000. But it reached to $9,467. I knew that while that they almost reached their goal, they knew they would create something special with their third album.

Now listening to If All Goes Wrong, it’s a return to the sounds of not just the prog-rock genre, but a mixture of both hard rock and pop rolled into the mix. And the six highlights on here, just shows how much they’ve really took me on a different level. With Savage in a Fancy Suit, it is a nod to the late great Jon Lord of Deep Purple. Aaron honors the master and bringing not only, the Purple sound, but the forces of Uriah Heep’s Ken Hensley.

You can hear some of the aspect from the Demons & Wizards-era and it shows how much appreciation Clift and his band members bring the two combinations into a giant circle. Better off Before is their nod to Psychedelic-Baroque pop essences of The Beatles Sgt. Pepper-era meeting early Queen whilst Jeff Lynne conducting and arranging the composition bringing the two together.

It’s almost like a mini-opera of the composition as if they wrote it for an animated series and doing it the right way. Inspired by the 1986 classic by Hayao Miyazaki, Castle in the Sky gives the band a chance to create this alternate score by giving them a chance to nod their heads to Miyazaki’s career for all the accomplishments he’s achieved.

There are some stop-and-go moments, Moving Pictures-era, ascending rhythms, and flying towards the sun moments that just gives them a chance of a lifetime to spread their wings and head towards the light. The only small criticism I have is the opening track, Faith.

Now it is a terrific introduction that gives the engine all revved up and the drums rumbling, and some thundering guitars also done by guest musicians Dave North and Van Wilks, but I could tell that Aaron was struggling to hit that high note in the bridge of the midsection of the song, but it’s almost as if he nearly strained his vocals with it. I wish that he could lowered it down a little bit and give his voice a chance to relax. But it is a killer introduction to start the album off.

Absent Lovers which was inspired by Homer’s The Odyssey, is a moody composition. Filled with a classical guitar and haprischord introduction filled with a string section and the mellotron (in which at times I would say Mellotron’s galore!). The song has this structure of getting away from the madness of what has happened behind closed doors and being free from the scenery and avoiding the scenario before bursting the door down in the midsection.

Wild Hunters has this mid-‘80s New Wave sound. Like a cross between the combination of both Peter Gabriel and Danny Elfman doing a collaboration during the sessions of So and So-Lo, the bass riffs done by Devin North along with Kevin Chin and Dave North doing some incredible guitar work through space and time. It has this score of a sequence straight from the Library sequence where Emilio Estevez’s character does this incredible dance sequence before closing the door whilst screaming to break the glass in John Hughes’ 1985 classic, The Breakfast Club.

Aaron Clift has shown no sign of stopping. He and his band members have brought a light of hope at the end of the tunnel with the new album, If All Goes Wrong. The Experiment have almost finally reached Emerald City in the land of Oz after following the long yellow brick road to see where their goal will reach them towards.

Kearin Cook’s artwork of the album cover, has this tug towards Miyazaki’s third film from the title-track on the album. If All Goes Wrong took me about six or seven times listening to this album. Now is it The Aaron Clift Experiment’s greatest album? No, but it is a very good release this year. And I hope Aaron continues to do more amazing work for many, many years to come.
Posted by znathanson at 10:26 PM