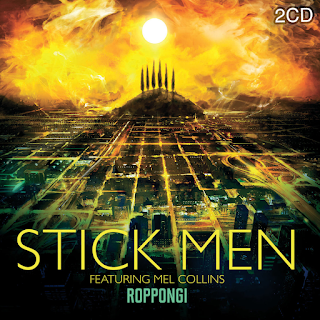 This 2-CD set sees Stick Men back at the land of the rising sun again which they were on tour this year at the time promoting their new album, Prog Noir. This is the second time they brought along a member of King Crimson. They did that with violinist David Cross on the Midori album, this year they brought Saxophonist and flautist, Mel Collins to the forefront for those performances. These were two complete shows they did recorded live on February 21, 2017 in Tokyo at the Billboard.

It’s almost as if you are going back for another round with Stick Men. Since I have a love of King Crimson’s music, Stick Men are now one of favorite bands since last year after discovering them on Sid Smith’s Podcasts from the Yellow Room. Tony Levin, Markus Reuter, and Pat Mastelotto are like a band of brothers working together as a team.

There are so many moments on Roppongi I wish I could describe on third or fourth listen, but it’s a trip to listen more of the incredible band who not only are bringing the sounds of Crimson and Robert Fripp as he described it as a Way of Doing things, but bringing in new material also. In an interview that is published right now by Anil Prasad of Innerviews: Music Without Borders, Pat mentioned they want to move forward and write their own material.

There’s a huge amount of miles for Stick Men he said that wants to be together both on and offstage and show how much has depend in their relationship between all three of them. I think in my opinion, it would be very interesting to see something like that and not just play the music of Crimson, but bringing in some new material to see if they appreciate it or not.

But when you listen to these amazing live performances in Tokyo, you can feel the vibrations of not just Crimson’s music, but their own sound, their own music, and the future. And imagine yourself being in the audience just in awe of these amazing men carrying the grocery bags they bring to the Mighty Thor hammer with them. There are of course the classics including Larks’ Tongues in Aspic Part II and the snarling intensive journey into the tidal waves whilst going into the outer limits on Sailor’s Tale.

But Mel Collins on the title track, his flute and sax brings you into a journey of relaxation into the rivers and forests that show a light of hope. He gives the audience a hypnotic texture to show where he and Stick Men are about to take them into. On the second show of the second CD, Prog Noir is a dangerous live version.

This is a much better version that’s better than the studio version. And as I’ve mentioned in my review of the album last year, Stick Men carry the nod of David Bowie’s Outside-era. Now I’ll admit this, Tony Levin is not a great singer, but he does a good job describing the spiritual aspects as Mel comes back into the center stage with Shiro.

He takes his sax by bringing some echoing reverb effects and walking on a dangerous tightrope for an electronic nightmare with bits of a sonic voyage. It’s jazzy, avant-garde, and up to know when the brick walls collapse to increase the heat gage and explode at any second. Level 5 where I almost heard the squeaky mice effect and dooming brutal forces by making sure that the battle is ready to begin. It has the nightmare scenarios, goosebumps, and hitting you right in the stomach as Markus raises the temperature up to 800 degrees. Stick Men never, ever does me wrong.

And with Roppongi which translates to Six Trees, it shows the band even more since Midori.


While it shows another second round of performances of the two shows they did in Japan in February of this year, they bring the sinister, ominous, terrifying, and hidden sounds that creep up behind you. So get ready to embark on another adventure with Stick Men’s music for the mind-blowing sounds of Roppongi.
Posted by znathanson at 8:08 PM