Gilad Atzmon And The Orient House Ensemble - The Spirit of Trane 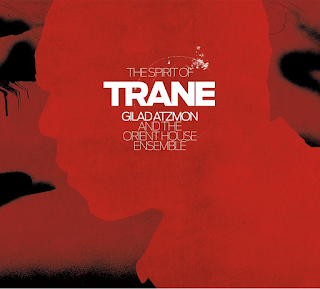 It’s been 50 years since we lost one of the influential and inspiration icons of the history of Jazz. And it would have been his 91st birthday if he were still here creating more musical landscapes and pushing the envelope for the amazing late great, John Coltrane. He once described music as the spiritual expression of who he was. Faith, knowledge, and being. Gilad Atzmon and the Orient House Ensemble want to bring the tribute of Trane’s music by carrying his flaming torch and making it grow and making sure it doesn’t burn out.

Released on the Fanfare Jazz label, The Spirit of Trane was recorded in two days at Eastcote Studios in London of December last year. You can feel Trane’s presence between the Orient House Ensemble. To fill in for Chris Higginbottom, Italian drummer Enzo Zirilli who appeared on the Talinka album, worked with Antonio Forcione, Sarah Gillepsie, and Vittorio De Scalzi of Italian Progressive Rock group, New Trolls, comes into the forefront.

Listening to this album as I’ve mentioned before, Coltrane’s spirit fills the studio and on the album to fill in the pieces of the puzzle that match well into his work. And the six centerpieces on here, you might be prepare to bring some Kleenex with you on them. On the opener, In a Sentimental Mood, Frank Harrison’s opening classical piano brings to mind a lullaby introduction before Atzmon sends a smoothing relaxing atmosphere on his Tenor Sax to give the Sun a chance to rise up for a new morning.

The Sigamos String Quartet help out by reminiscing the new dawn and new day by nodding to the late great Henry Mancini with a late ‘50s/early ‘60s sound on the string section. Yaron’s double bass is walking on a fresh warm salt watery beach to get a glimpse of the first sign of a rainbow. And near the end, the sax is going over the area as the band delve into A Love Supreme nod.

With Minor Thing, the ensemble does a wonderful crescendo nod to the 1965 classic introduction of Acknowledgement (Part 1). It almost sounds very close to a continuation as if Atzmon wants the opening track to be moving forward to find the inner self by knowing who you really are. There at times he brings to mind the essence of not just Coltrane’s work, but the late great Elton Dean of the Soft Machine when he hits those high notes on his sax.

The string quartet come back for another beautiful lushful morning introduction of Soul Eyes. You can close your eyes and imagine being in a black-and-white film in the streets of Paris, France set in the late ‘50s/early ‘60s as if they were directed by both Louis Malle and Jean-Luc Godard. This piece of music has this setting of a scenario like something straight out of a documentary-sque feel of Paris in the night time.

I got this nod in which the Orient House Ensemble are not only paying a nod to the master but the essence of the music of Wes Montgomery also. Meanwhile, the band take you into an amazing 5-minute ride as they take on Trane’s finest work, Blue Train. Atzmon and Stavi follow each other as Gilad blares out incredible improvisations with some intense solos and making sure it would get John’s gigantic stamp of approval.

Frank’s Piano and Enzo’s drumming do this incredible duel while Frank really goes into the tunnels and seeing where his hands take him. Enzo’s drumming is not just staggering, but he around the area by a complete circle showing his influential touches between Philly Joe Jones and Elvin Jones.

Naima is a romantic ballad which appeared in Coltrane’s fifth studio album released in 1959 entitled, Giant Steps is named after his ex-wife Juanita Naima Grubbs. The string quartet and Gilad create this rich and exuberant beauty and making your heart tug at the exact moment to end of saying how much love of this person you want to be with for the rest of your life.

Then there is of course, Giant Steps. Here, this is a mid-slow walking take of the composition. Yaron Stavi does this ballad walking line on his double bass. He comes into the front of the stage to get a chance in the light and he goes into the styles of Paul Chambers and Charles Mingus and believe me, Yaron knocks it out every time whether he plays both electric and double-bass, he goes throughout those sections and knowing where his fingers on the string will hit next.

Say It (Over and Over Again) closes the album to give the listener a fond farewell as they head to the next bus stop to see where it will head next. Frank gives the nod to let everyone know it's to pack it in and head onboard the next station and see where The Orient House Ensemble will lead into next. Before Gilad's sax cries off into the night, the Bus drives into a new beginning also as the sun sets off into the west as Atzmon brings a wonderful romantic improvisation to close the curtains.

I’ve been an admirer of Coltrane’s music since re-discovering his work when I was in College twelve years ago, and with The Spirit of Trane, it’s one of the most emotional, beautiful, and touching tributes to the master that Gilad and the Orient House ensemble brings here. As he once said again about music, “I think music is an instrument. It can create the initial thought patterns that can change the thinking of people.”
Posted by znathanson at 7:24 PM