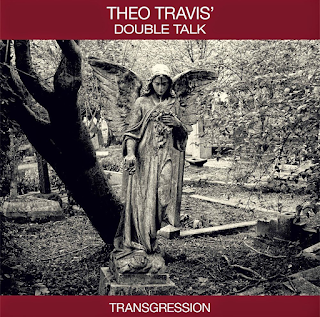 British Saxophonist Theo Travis is a busy man when it comes to projects from Gong, Robert Fripp, Soft Machine Legacy, Porcupine Tree, and now on tour with Pink Floyd’s David Gilmour. This year, he has released his ninth solo album with his band Double Talk released on the Esoteric Antenna album entitled, Transgression. This is Jazz Rock at its finest with a Progressive and Bluesy approach that will surprise listeners to capture the essence of the golden-era of the ‘70s.

Travis sax-playing, is off the wall and mind-blowing. He is like a conductor telling the bandmates to follow him where he wants to take them into the next level whether it’s mid-fast or an increasing tempo for vibrations of a heavier approach to follow the sounds of King Crimson, Mahavishnu Orchestra, and Talk Talk. Theo knows his apples and oranges very well when it comes to bands like that. Not to mention the four highlights on here.

Smokin’ at Klooks has a bluesy bossa-nova 4/4 time signature element to the early sounds of Santana’s Abraxas-era that guitarist Mike Outram takes his instrument to the essence of the master with a bluesy cavernous sound while the smoothing beauty that captures the vibes of Coltrane’s music with a joyful rhythm on Song for Samuel, that shows Theo his chops on the sax for an amazing improvisation. Pete Whittaker goes into a groovier Jazz organ sound as he and Mike do some amazing beauty together.

Both lead and rhythm in a mellowing tone. The opener, Fire Mountain brings the essence of both John McLaughlin and Robert Fripp as Outram brings both the combinations of the two as if it’s a one piece as if both guitarists have worked together created the sounds of Red, Dance of the Maya and a little homage to Nucleus’ We’ll Talk About It Later-era with some amazing fusion-like solos to go with it.

The 12-minute title track goes into a psychedelic-Floyd-sque meets Gong flavored with an ascending tone as it starts off with an oily way introduction between Theo’s Flute and Mike’s Guitar doing a Zappa-sque melody. Pete uses his Organ as a driven climbing melody in a symphonic rock style before Mike comes in with a blistering improve followed by Theo’s sax blaring out of the blue as Nic France helps out for a run-through on his drums to give it that driven flare.

This is my second time listening to Transgression. And I have to say, I’m very impressed of what I’ve listened to from beginning to end. Theo knows exactly what he’s accomplished to bring the Jazz and Prog world to a standstill. And with help with Steven Wilson at the mixing table, you know something special is going to happen. Mark and Vicky Powell have never disappointed me when it comes to the Esoteric label.


So if you are ready for a Psychedelic, Jazz, Experimental/Prog adventure, then enjoy the music of Theo Travis’ Double Talk’s Transgression.
Posted by znathanson at 8:33 PM